A Mixed Outlook for This Growth Stock: V.F. Corporation (VFC)

V.F. Corporation (NYSE:VFC) presents a familiar investing conundrum for which I don’t have a definitive answer. The said problem is whether to buy a stock if you like its long term prospects but think it is facing near term risks. In summary, the company has some great brands that are benefiting from favorable trends in clothing fashion, but there are short term concerns with some of its end markets, and given the evaluation it’s hard to argue that there is a margin of safety for any disappointments in 2013.

V.F. Corp: A Company You Know but Don’t Know

In order to accelerate learning I will link to a previous article on V.F. Corp. Its most famous brands are The North Face, Timberland and Vans, all of which operate within the Outdoor & Action Sports segment. Its second largest segment is Jeanswear, which contains some iconic brands like Wrangler and Lee.

A breakdown of yearly profits is below. In terms of geography North America makes up 63% of sales, Europe 22% and Asia 8% and 7% for the RoW.

It was a mixed bag of performances in the largest segment. The North Face saw 11% constant currency growth in Q4. This is a good result considering that this year saw another mild winter. I suspect VFC learned a lot from last year, and it seems that it is not going to have the same inventory overhang issues as it did then.

However, it was a different story at Timberland.  The warm weather has certainly had an effect with Timberland, but I think the real key to its weak performance (revenues down 4% in the quarter) was more to do with its legacy strength in some weak Southern European markets. Europe is Timberland’s largest sales center, and Southern Europe is its largest market within the region. The guidance is for mid-single digit declines in Europe for Timberland, and this could prove problematic as VFC is integrating Timberland into its European operations this year.

The last of the major outdoor/sports brands is Vans, and it can seemingly do no wrong. Vans achieved 22% constant currency growth and a superb 60% growth rate in Europe alone for Q4. I think the divergence between the performance of Vans and Timberland in Europe is not only a consequence of the weather, but also due to the existing penetration rates. Vans simply has more room to grow, and its brand appeals to a demographic in tune with e-commerce.

What all three have in common is that VFC is expanding its direct-to-consumer (DTC) and online sales. It’s a good way to try ad sales in a difficult marketplace. In fact, DTC revenues now make up 21% of revenues with the number forecast to rise to 23% next year.

It was a mixed story with Jeanswear too. Revenues were only up 4% in constant currency for Q4, but profits rose 53% in the quarter and over 13% in the year. Much of this is due to relatively cheaper cotton prices, and investors should be wary of expecting the same improvements this year.

A good way to think about this is to compare VFC’s Jeanswear division with The Jones Group Inc. (NYSE:JNY). The latter’s gross margins are materially moved around by cotton prices, and we can see the inverse relationship in the following chart. 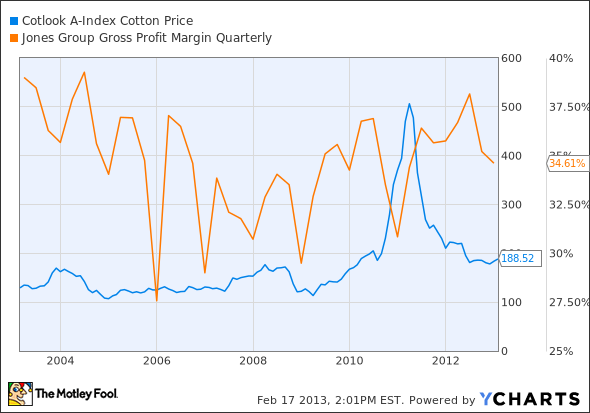 The underlying picture was mixed in the quarter with Wrangler revenues up 5% but Lee flat. The latter is facing pricing and top-line pressures from its distribution channels in North America (many of which are troubled mid-market dept stores), while in Asia the moderation in growth has produced an inventory build-up.