A Lesson for Apple Inc. (AAPL) from High School Biology

Apple Inc. (NASDAQ:AAPL)‘s downward spiral that started in late September eroded billions of dollars from the market. The investors who remained loyal to the stock and didn’t sell out then are now left in utter disappointment. One such investor, the famous hedge fund manager and founder of Greenlight Capital David Einhorn, just couldn’t take it anymore. He’s recently came out and decided to sue the tech giant in an effort to push the company management to return some of the lost value back to shareholders using the billions of dollars hoarded in cash.

Einhorn proposes a preferred stock issuance plan. Contrarily, Mad Money’s Jim Cramer is proposing that Apple Inc. (NASDAQ:AAPL) should instead use that cash in crossing-over to other industries. He proposes buying companies like Twitter or Netflix. And then we have our fellow Fool blogger, Andres Cardenal, who proposes a share buyback for Apple. The possibilities are endless and shareholders should rest assured that, now that they’ve been sued, Apple management is seriously considering each potential route at the moment.

Nonetheless, the last few months have been very unnerving for shareholders as they watched the biggest company (by market capitalization) in the world decline to dirt cheap valuation multiples for no good reason. Many analysts have been speculating the possible reasons for the sudden unwarranted selling activity. Here’s my take on it.

Symbiosis, a biological term I learned in high school biology, explains the interaction between two different species in which both benefit (mutualism), one benefits and the other neither gets harmed nor benefits (commensalism), and one benefits and the other gets harmed (parasitism), as well as some other types. Interesting, sure, but why the biology lecture in a financial blog? Well, because I think there’s a lesson for Apple Inc. (NASDAQ:AAPL) to learn from it.

In a space where almost every other competitor exists in symbiosis with one another, Apple Inc. (NASDAQ:AAPL) is left alone, all by itself to survive in this huge, perpetually growing, and fast-evolving technology industry. Look, for instance, at Nokia Corporation (ADR) (NYSE:NOK) which, at last, sensibly decided to give up its flopping Symbian OS to adopt its competitor’s OS–Windows 8. Stephen Elop finally gave in to the fact that his company needed rival Microsoft Corporation (NASDAQ:MSFT)’s assistance to survive. Together, the two benefit each other today. Nokia is finally selling ‘smartphones,’ not just phones, and Microsoft is starting to claw back some of its lost market share.

Out of the 6.6 million units Nokia sold in Q4, only 2.2 million were its Symbian phones. On the other hand, the Microsoft Windows 8 OS-based Lumia phones accounted for more than two thirds (4.4 million) of Nokia’s total units sold. The stock more than doubled following the news of Lumia phones’ sell-out. Likewise, Microsoft’s Windows OS’ fourth quarter market share also climbed to 2.6%, which is a 150% increase from the same quarter from the prior year. Both companies appear to be better positioned in this mutualistic relationship. 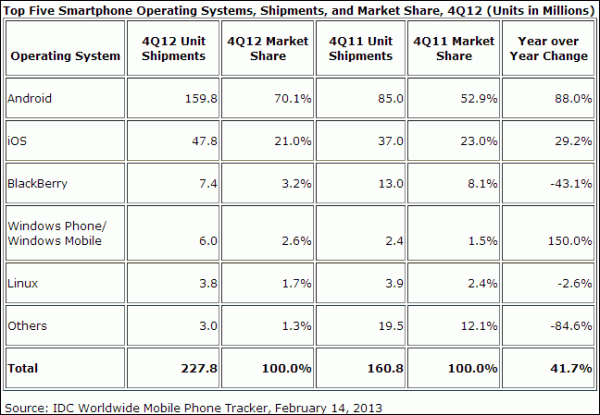 Similarly, the mighty Google Inc (NASDAQ:GOOG) gives away its Android OS to Samsung for free, letting it use its biggest applications ecosystem (second only to Apple Inc. (NASDAQ:AAPL)). In return, Google earns ad revenue from Samsung buyers, the biggest buyer-base of a mobile vendor in the world now.

Can a Nokia Corporation (ADR) (NOK) Tablet Compete With the iPad?

Google and Apple Political Lobbying: How Much are Google and Apple Spending...
Monthly Newsletter Strategy
Download a free copy of our newsletter and see the details inside!
Hedge Fund Resource Center
Billionaire Hedge Funds