One of the leaders in jewelry and high-end gift items, Tiffany & Co. (NYSE:TIF). is synonymous with “luxury” all over the world.  When the financial crisis hit in 2008-09, and retailer of items that were seen as non-essential or luxuries took an enormous hit in the market, and Tiffany was no exception, sinking to a 2008 low of just $16.75 after trading above $55 just the year before.

Since then, however, it is safe to say that luxury has returned.  Tiffany’s revenues are higher than they ever were, even before the crisis, and the company has active expansion efforts going on.  With the stock trading at around $65 and valued at a lofty 20 times earnings, should investors get out, or are there more gains to be had as the economy recovers and Tiffany & Co. expands its global footprint? 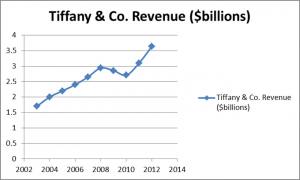 As mentioned, Tiffany & Co. (NYSE:TIF) is a truly international company and is getting bigger.  In 2012, 50% of the company’s revenue came from North America, with 21% from Asia (excluding Japan), 17% from Japan, and 12% from Europe, where I see the most potential for expansion once Europe’s economic troubles are behind them.

In fact, the company recently opened their first store in Eastern Europe (Prague), and they have expressed interest in other emerging markets such as Russia and India.

So, why should investors buy stock in Tiffany & Co. (NYSE:TIF) as opposed to competitors such as Signet Jewelers Ltd. (NYSE:SIG) or even an online giant such as Amazon.com, Inc. (NASDAQ:AMZN) which does not have the overhead that physical retailers do and can undercut virtually any other retailer.

Signet Jewelers is not a very well-known name, but the stores they operate are.  Signet operates over 1,300 stores in the U.S., mostly under the names Kay Jewelers and Jared the Galleria of Jewelry.  Jared is very well-known due to their many advertisements with the catchy line “he went to Jared.”  Signet trades at a much cheaper valuation than Tiffany at just 15 times earnings, with pretty similar growth projected.

Amazon can certainly undercut most retailers’ prices and they do have a nice selection of fine jewelry (I actually bought my wife’s engagement ring on Amazon).  However, this is one area where internet-based businesses do not have the usual advantage.  With a major purchase such as jewelry, consumers like being able to physically see, touch, and inspect what they purchase, and are willing to drive to a store to do so.