America Movil SAB de CV (ADR) (NYSE:AMX), the fourth largest telecom provider in the world, has been a popular target for bears lately, and for good reason. The Pan-American communications giant, founded by Mexican tycoon Carlos Slim, is facing an antitrust decision in Mexico that could break apart its vast empire, which has 261.6 million subscribers across 18 countries.

As a result, sellers have driven the stock down nearly 20% over the past month to a three-year low. But in my opinion, this myopic reaction may have created a buying opportunity for patient value investors with a longer investment time horizon.

America Movil SAB de CV (ADR) (NYSE:AMX) generates revenue from wireless and broadband communications, traditional landlines, and a stake in the television business. Wireless communications remains its strongest performer, due to the rapid adoption of smartphones across the America (NYSE:AMX)s.

Let’s break down América Móvil’s subscriber base from its five largest markets. The total subscribers figure – which is mainly relevant in Brazil and Mexico – includes landline, broadband, and television service subscribers in addition to wireless ones.

In Mexico, America Movil SAB de CV (ADR) (NYSE:AMX) controls approximately 70% of the wireless market with Telcel, as well as roughly 80% of landline services with Telmex. The company controls 24% of the wireless market in Brazil, and 60% in Colombia. These large market shares have kept its revenue growing at a healthy rate over the past three years since the bottom of the recession. 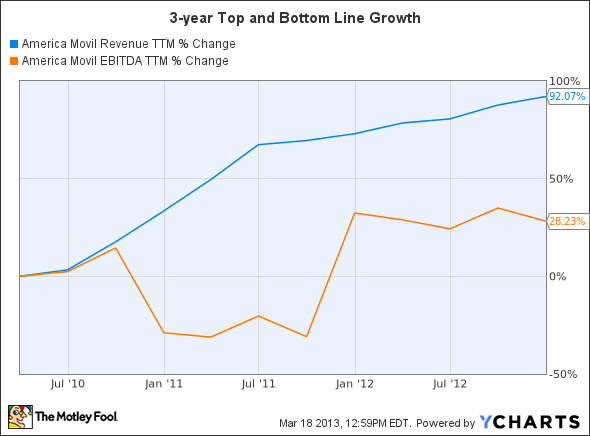 However, phone service prices in Brazil and Mexico have declined over the past three years, causing operating and profit margins to contract. 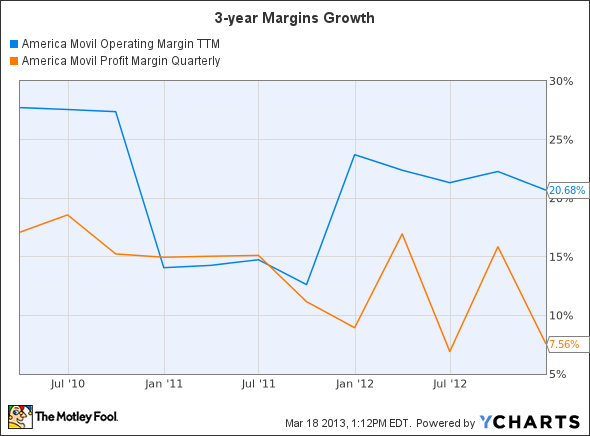 In addition, interconnection fees in Mexico – the rate a telecom company is charged when a customer dials into a competitor’s network – have been lowered by half over the past two years.