Earlier last year, Nintendo Co., Ltd (ADR) (NASDAQOTH: NTDOY) shares rallied on several occasions to around $19.50, only to continue dropping. Hope was renewed by early-October 2012, when investors became excited about the potential growth for the Wii U. Shares rose to $17.50 that October, but it turns out that was an intermediary peak.

Investors anticipated sales of the Wii U would help Nintendo make a profit once again. Instead, the reality was more severe, but not entirely unexpected. Realistically, investors could have accounted for a weak start in holiday sales, because the entirely new way of playing games will need time to catch on.

Operationally, Nintendo failed to anticipate that the demand for the premium product would be greater than the demand for the “value” model. In hindsight, it would make sense that cost-conscious fans would opt to save $50. Instead, gamers were more interested in the premium model. Second, Nintendo pushed out an update for the console that reportedly made it unusable. This happened when a user turned off the device while the unit was being updated.

Sony Corporation (ADR) (NYSE:SNE) is an alternative to investing to Nintendo. Shares are up around 50% since late-December 2012. More recently, Panasonic’s profit surprise in Q3 helped ease concerns about Sony’s prospects. By the middle of the year, Sony is set to launch a successor to the Playstation, and an announcement can be expected by Feb. 20. The PS4 is rumored to have a processor from Advanced Micro Devices, Inc. (NYSE:AMD).

Speaking of new consoles, Microsoft Corporation (NASDAQ:MSFT) is set to release details on its Xbox 720. In the near-term, content remains something to watch with the Xbox. When Netflix made the first episode of  House of Cards available for free, Xbox subscribers with Silver membership access were given access.

relies on Nintendo’s success for its own success. When console game sales decline, profits are hurt, but when there is a console refresh, there is hope for GameStop (NYSE:GME). GameStop also has a market capitalization that is more similar to that of Nintendo, at $1.8 billion. Nintendo has a market cap of $1.5 billion. 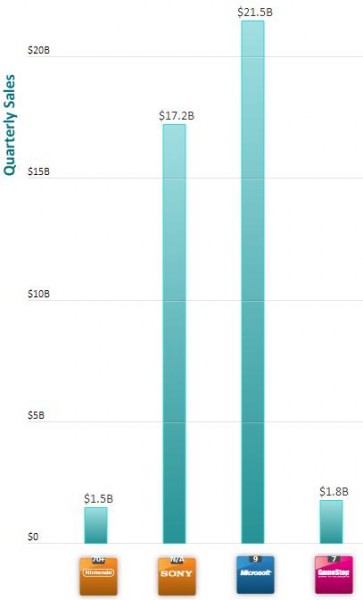 If Wii U sales gain momentum, investors could consider shares of GameStop. The resale market for both the Wii U and the original Wii would encourage consumers to shop at GameStop. Sales of used Nintendo games for both Nintendo consoles would also be higher.

Nintendo recently forecast its full-year sales for the Wii U would be lower than previously thought. Nintendo closed at around $12.04 as investors reacted to the negative outlook for the company. The downbeat forecast creates an opportunity for investors who think Nintendo’s prospects remain bright. There are a number of reasons to be positive about the company:

1). Nintendo is merging the 3DS and Wii U divisions, and will invest $340 million (US) to build a development facility for the new segment

2). Wii U console prices will not be cut further

3). The original Wii outsold the Wii U. This may sound like bad news, but continued interest in the older product supports Nintendo’s brand. Nintendo has plenty of time to release more titles to the Wii U and to increase marketing

4). Amazon (AMZN) made Instant Video available for the Wii. This affirms support by a giant, and suggests that the Wii U will improve its content-based entertainment offering

5). Updates in the spring and summer will please consumers

6). More game titles for the Wii U will appeal to core fans. This includes the 3D release of Super Mario and Mario Kart. Details will be released in June 2013, during E3

Is It Time to Sell Qihoo 360 Technology Co Ltd (QIHU)?

Why Dell Inc. (DELL) Went Private, and What It Means