The European sovereign debt crisis, pushing Spanish bond yields to the Euro-era high, has taken a toll on the stock markets around the world. With Europe’s crisis showing no signs of easing, growth is slowing in both China and the United States. Moreover, the outlook for U.S. corporate earnings has become gloomier, as earnings are expected to decline in the third quarter for the first time since the third quarter of 2009. With lackluster employment growth and dreary consumer and business sentiments, all this, in general, is weighing heavily on the stock prices.

Still, several stocks are defying all the gloom and doom, and are climbing to new 52-week highs. Among the best performers, there are several dividend-paying stocks. Here is a quick overview of five attractive dividend payers that are currently reaching new price highs.

China Mobile Ltd. (NYSE:CHL) is the largest wireless operator in China with a total market capitalization of $232 billion. The company has 683 million subscribers, six times more than Verizon Wireless. In fact, just last month, the Chinese mobile telephony operator increased its subscriber count by 5.6 million. The company has shown consistent growth in its revenues, high gross margins, and solid EPS growth. It has almost no debt and boasts a free cash flow yield of 15.3%. This yield is high despite the company’s stock running up to a new 52-week high of $57.82 a share. The stock is 16% higher than a year ago. The telecom giant pays a dividend yield of 3.5% on a payout ratio of 42%. The company’s peers China Telecom Corp. Ltd (CHA) and China Unicom (CHU) pay yields of 1.9% and 0.9%, respectively. Billionaires Cliff Asness and Israel Englander hold major stakes in the company.

Wal-Mart Stores Inc. (NYSE:WMT) is a $252 billion U.S. retail giant with international operations. The stock has been on a tear since mid May. The company represented an attractive value play and investors snapped up shares in a flight to quality and safety as bond yields plummeted to record lows and global economies weakened. The stock has risen nearly 41.4% over the past year to a new 52-week high of $74.80 a share. On a forward P/E basis, the stock is still trading below the overall market, the broadline retailers industry, and the company’s long-term metrics. The retailer is expected to see EPS growth averaging about 9% per year for the next five years, close to the EPS growth realized over the past five years. The stock is a dividend aristocrat that has raised its payout every year since starting to pay a dividend in 1974. It pays a dividend yield of 2.1% on a payout ratio of 34%. Its competitors Costco Wholesale Corporation (NASDAQ:COST) and Target Corp. (NYSE:TGT) pay yields of 1.1% and 2.3%, respectively. Legendary investor Warren Buffett had nearly $3 billion invested in the company in the first quarter of 2012.

Northrop Grumman Corporation (NYSE:NOC) is a $16 billion company that provides products, services, and solutions in the aerospace, electronics, and information systems industries. It is one of the key U.S. defense contractors. Even though the company posted lower revenues and earnings in the previous quarter on a year-over-year basis, it still beat analyst expectations for both top and bottom lines. It also raised guidance for the year citing “a robust level of new business capture and the increase in total backlog.” The planned defense budget cuts and those slated for next year under the process of sequestration would certainly hurt the company’s sales, earnings, and cash flow. However, the defense contractor’s management is confident that the areas in which the company has a lead, such as unmanned systems, cybersecurity, intelligence, and logistics, would continue to be U.S. government’s priorities in the coming years. The company’s shares have increased 8.7% over the past year, and they are currently hovering around the new 52-week high of $66.04 per share. On a forward P/E basis, the stock is priced below the defense industry and the overall market. The company pays an attractive dividend yield of 3.3% on a low payout ratio of 28%. Its main rivals The Boeing Company (NYSE:BA), General Dynamics Corp. (GD), and Lockheed Martin Corporation (LMT) pay yields of 2.3%, 3.2%, and 4.4%, respectively. Among fund managers, the stock is popular with Cliff Asness, Ken Griffin, and David Dreman.

PG&E Corporation (NYSE:PCG) is a multi-utility company serving some 5.2 million electricity customers and 4.3 million natural gas customers in the United States. The utility boasts an attractive dividend yield of 3.9% and has a payout ratio of 84%. Its peers Edison International (EIX) and Sempra Energy (SRE) yield 2.8% and 3.4%, respectively. The stock has risen to a new 52-week high of $46.26 a share. It is up almost 11.3% over the past 12 months. The stock is attractive for income investors, given that electric and multi-utilities offer comparably higher yields that U.S. Treasuries and most dividend stocks. The stock of PG&E Corporation is trading on a forward P/E below that of its industry and its own historical averages. Its price-to-sales and price-to-cash flow ratios are below industry averages. Moreover, the stock has a very low beta of 0.3, which may have benefited the inflows into the stock during the currently volatile markets. Fund managers Phill Gross at Adage Capital Management and billionaire D. E. Shaw are fans of the stock (see D. E. Shaw’s top picks).

Exxon Mobil Corporation (NYSE:XOM) is a $409 billion integrated oil and natural gas giant and the largest U.S. energy company. The company’s stock has found a new momentum that has taken it to a 52-week high of $87.95 a share. The stock is up 9.6% over the past year. Exxon Mobil missed analyst estimates in the second quarter as the company’s oil and natural gas output declined along with energy prices. The economic slowdown in Europe and Asia also contributed to slower sales. Notwithstanding the economic slowdown, the company expects the energy demand to rise in the future. Analysts also see higher EPS growth in the coming years, forecasting growth to average 7.8% per year for the next five years. Still, UBS analysts downgraded the stock recently based on deteriorated “relative valuation, disappointing production trends, and (lower) earnings quality.” The stock is priced more than its industry on average, but it still looks attractive as a dividend growth pay. Exxon Mobil has raised dividends for 29 consecutive years. It looks poised for additional dividend hikes in the future, following a 21% boost this year. The stock currently yields 2.6% on a low payout ratio of 28%. Its peers ConocoPhillips (NYSE:COP) and Chevron Corporation (NYSE:CVX) pay higher yields of 4.8% and 3.3%, respectively. Billionaire Ken Fisher and fund manager Phill Gross each hold more than half a billion dollars invested in the stock.

Insiders Are Buying These 2 Dividend Stocks 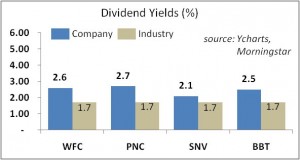 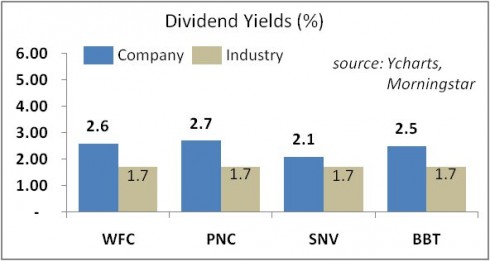