A CEO with a good management team can take a languishing company and turn it into a growth machine in a position of market leadership with the capability of making shareholders rich in the process. However, some of these turnaround situations provide a great deal of extra risk stemming from the possibility of these grand plans not working out. The five companies presented below are headed by management teams looking to improve the standing of the companies under their stewardship.

Home improvement retailer Lowe’s Companies, Inc. (NYSE:LOW) sits at the bottom in terms of profit margins (see table below) and total stock price return (see chart below) when compared to competitors such as The Home Depot, Inc. (NYSE:HD) and Lumber Liquidators Holdings Inc (NYSE:LL). While Lowe’s still beats the S&P 500 total return index with a 88% return it pales in comparison to the 673% from Lumber Liquidators. 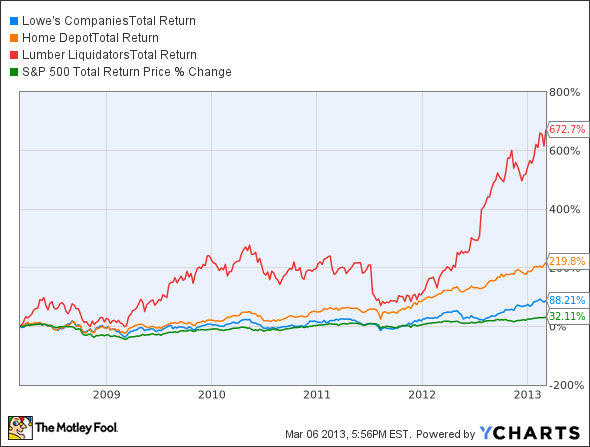 According to its latest earnings call (Log in required); Lowe’s current plans for improvement reside in inventory management and the devotion of store labor hours to customer assistance. It hired a new merchandising executive, Mike Jones, with experience in supply chain management at companies like GE and Husqvarna.

Lowe’s discovered that adding store labor hours on the weekends specifically for customer assistance paid off in the form of higher “close rates” or customers who walked out the door with sold merchandise. In 2013, Lowe’s plans to devote more store labor hours in the middle of the week where it sees an opportunity to boost customer assistance versus just simply tasking.

These improvement efforts combined with macroeconomic factors such as the housing recovery should translate into continued superior gains for Lowe’s Companies, Inc. (NYSE:LOW).

Beverage barbarians at the gate

Surprisingly, Dr. Dr Pepper Snapple Group Inc. (NYSE:DPS)’s share price outpaced the other big beverage companies since its IPO over the past five years, returning 91% and surpassing Coca-Cola by 13% (see chart below). 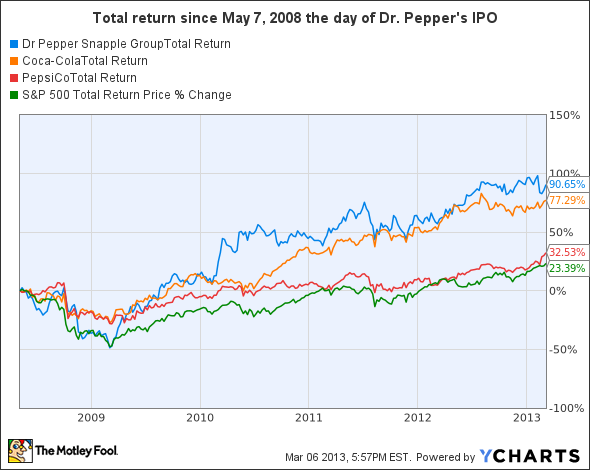 Another beverage company, homemade soda system maker, Sodastream International Ltd (NASDAQ:SODA) showed strong growth in 2012. The company’s management plans to stay for the long haul as evidenced from its Super Bowl ads. Revenue and net income increased 51% and 60% respectively. It showed the highest amount of revenue in its “Americas” segment growing 96% in the fourth quarter.

Currently, SodaStream leans on inefficient methods of manufacturing and distribution and it plans on building a facility in its home country of Israel to counteract this problem, according to its latest earnings call (sign-in required).

Apparel retailer Body Central Corp (NASDAQ:BODY) and its shareholders suffered through a terrible time in 2012. Excessive markdowns in inventory brought on by out of fashion merchandise drove comparable store sales (sales of stores open longer than a year) and operating income down 8.1% and 39% respectively for the year.

On Feb. 5, the company announced a new CEO, a new merchandising team, and the resignation of the merchandising executive responsible for its inventory mishaps. According to Body Central’s latest earnings call, a Senior Vice President in charge of trend and design stationed in New York City will keep this company apprised of new fashion trends.

After clearing out the old inventory, management plans to turn around the company with new store layouts and new fashionable merchandise translating into better results starting with the final quarter of 2013. The turnaround, if positive, will fully present itself in 2014.

Discount retailer Wal-Mart Stores, Inc. (NYSE:WMT) rules the retailing world as a go to place for low priced merchandise and groceries. However, No.2 chain Target Corporation (NYSE:TGT) wants to challenge Wal-Mart’s status by remodeling 100 stores with a grocery section according to its latest earnings call (sign in required).

While Target did warn that in the short term company sales could suffer due to increased payroll taxes and increases in the cost of living in general, remodeling stores and adding groceries will steal some of the grocery customers away from Wal-Mart Stores, Inc. (NYSE:WMT) and add to potential shareholder gains.

In 2012, Target’s revenue and net income increased 5% and 2% respectively; however, profitability declined 2% in the 4th quarter stemming from tight consumer spending.

In summary, the grand plans these companies have in place are worth watching. Riskier plans, if they work, can translate into better potential for rewards but they also leave the potential for great losses. If the plans come to fruition and management remains diligent the companies will prevail to the benefit of shareholders.

The article 5 Companies With Big Plans to Watch originally appeared on Fool.com and is written by William Bias.