The Dow Jones Industrial Average (Dow Jones Indices:.DJI) is only a couple of days removed from setting fresh all-time highs. The market’s most storied index has gained 18% year to date, and it sits just 1.6% below that recent record level.

It should come as no surprise that most of the Dow Jones Industrial Average (Dow Jones Indices:.DJI)’s 30 member stocks also trade near their all-time record highs. 3M Co (NYSE:MMM) comes close, with shares closing at 99.2% of its lifetime highs on Friday. That record was set less than two weeks ago and nearly eclipsed again last Friday. 3M Co (NYSE:MMM) shares have gained a market-beating 32% over the last year as market makers showed their appreciation for a fantastically diverse and stable business model amid global headwinds.

Running ahead of even 3M Co (NYSE:MMM), UnitedHealth Group Inc. (NYSE:UNH) shares are setting brand-new record prices lately. If Obamacare is about to destroy the health insurance industry, UnitedHealth Group Inc. (NYSE:UNH) investors aren’t buying that scary story at all. In fact, the stock isn’t trading not only for high share prices, but also at historically enormous P/E ratios. And it’s all supported by an impressive trend in revenue growth. 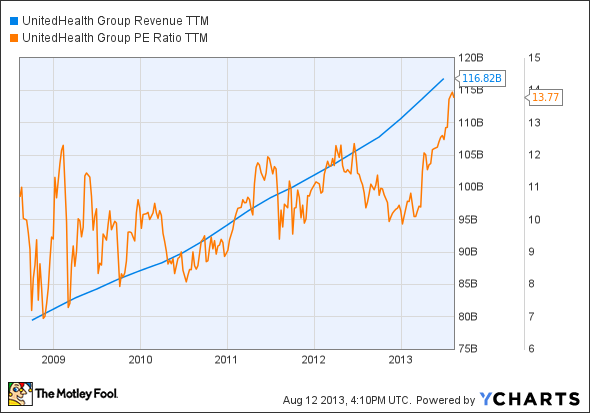 On the other side of the tracks, you’ll find that the Dow Jones Industrial Average (Dow Jones Indices:.DJI)’s all-time-high success story isn’t universal. Six of the 30 Dow tickers can be bought for less than 50% of their record prices, and a couple of the historical discounts are even more epic.

The casual Dow-observer might expect Bank of America Corp (NYSE:BAC) to sit at the top of that unfortunate list. The megabank fell from grace in 2008 and 2009, like Icarus flying too close to…well, risky mortgage bets.

Longtime shareholders are still hurting, but this is no longer the most drastic multiyear haircut on the Dow. Bank of America Corp (NYSE:BAC) has staged a fantastic turnaround lately. Share prices have nearly doubled in 12 months and tripled over a year and a half, and shares now trade at roughly 26% of Bank of America Corp (NYSE:BAC)’s all-time record price from before the 2008 crash. That’s the second-worst historical plunge on the Dow, leaving plenty of room for improvement yet.

Bank of America Corp (BAC): Is It Time To Follow Buffett Into This ‘Hated...