3D Systems Corporation (NYSE:DDD) & Stratasys, Ltd. (NASDAQ:SSYS) have been printing money so fast that they’re showing up the Fed! I was so sure of their ability to churn out the green last June that I did what I make a point not to do: initiate communication with a friend or relative about particular stocks using definitive terms.

The stocks of the two major 3-D printing companies have returned an average of nearly 60% in the 9-1/2 months since I sent my June 27 “buy!” note to my financial planner relative, who foolishly didn’t buy them for himself. 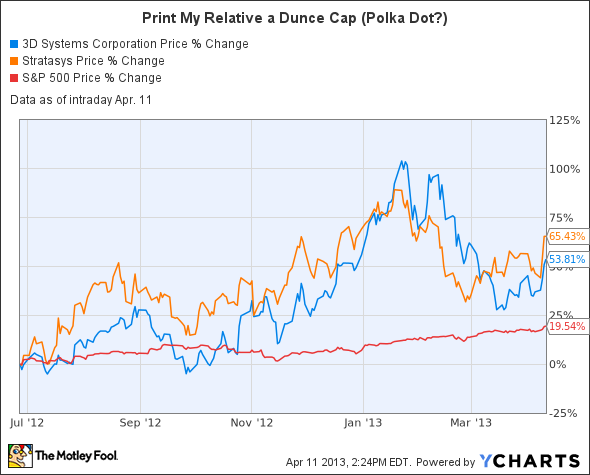 What happened June 27 that made me more confident in the industry? 3D Systems Corporation (NYSE:DDD) announced that its systems received certification to use in a broad range of healthcare products. That’s a big vote of confidence. There’s also much money in healthcare.

3D Systems Corporation (NYSE:DDD) is the largest ($3.2 billion market cap) company in the industry, and was the first-mover. Founder Charles Hull invented 3-D printing, which he termed “stereolithography” in his 1986 patent, and which is now often referred to as “additive manufacturing” because objects are built layer by layer. Hull is still on board (pun not intended) — as Chief Technology Officer.

The company has the broadest portfolio of 3-D printers. It has products for the industrial, commercial, and consumer markets. It also has an on-demand custom parts manufacturing business.

Stratasys, Ltd. (NASDAQ:SSYS), with a market cap of $3.0 billion, was founded in 1989 when Scott Crump and his wife invented fused deposition modeling, an additive manufacturing technology. Crump served as CEO until last year, when the company merged with Israel-based Objet. David Reis, Objet’s CEO, became the CEO of the combined entity. Crump remained Chairman of the Board, and took on the position of head of global innovation.

The company’s initial focus was the commercial and industrial markets. However, it also has consumer products.

The $480 million market cap company was founded in 2005, and went public in February 2013. ExOne Co (NASDAQ:XONE) is focused on high-end ($500,000+), industrial-use systems. Its systems can produce production-grade products from industrial metals, glass, and sand (molds). It also provides contract design and production services.

The stock’s up 35% from its opening price on IPO day, a more realistic figure for most investors than the IPO price.

This is a more speculative stock. The $235 million market cap company, which was founded in 2007 and IPO’d in February 2012, develops 3-D bioprinting technology for creating functional human tissues for research and medical applications.

Yup, Xerox Corporation (NYSE:XRX)! The once-mighty photocopier king, and inventor of the laser printer and graphical user interface (popularized by Apple Inc. (NASDAQ:AAPL)), among other innovations, is working on what would be the ultimate 3-D printing breakthrough.

The current 3-D printers can manufacture objects made from a vast array of materials, but there’s one notable thing they can’t spew out — electronic circuitry. That’s a biggie in today’s world, where electronics are embedded in even commonplace products. Xerox Corporation (NYSE:XRX)’s Palo Alto Research Center, or PARC, is working on this technology, according to a NYT’s article, “Tiny Chiplets: A New Level of Micro Manufacturing.”

(I’m including Xerox, though its tech is in the early R&D stage.)