3D printing is definitely a cool technology, but are the printers also cool as an investment opportunity?

While the current size of the 3D printing industry is small, engineering advancements will bring new opportunities to many industries and especially to manufacturers. By turning a design into a prototype using 3D printers, manufacturers can save a lot of time and money. We also haven’t talked about the opportunities for direct consumers. Applications for 3D printers range from health solutions to hobbies and more!

For those interested in getting some early exposure to this hot emerging industry, in the U.S., at least 3 public companies are listed as 3D printer companies. This article covers each of them: 3D Systems Corporation (NYSE:DDD), Stratasys, Ltd. (NASDAQ:SSYS) and ExOne Co (NASDAQ:XONE). Let’s check them out. 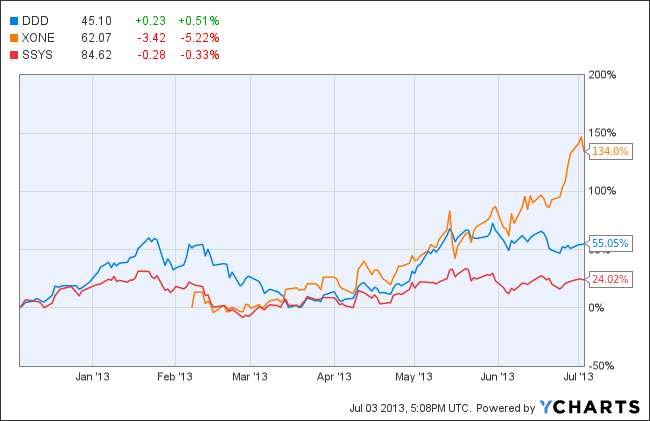 3D Systems: Attractive products but current market valuation may be too high

3D Systems Corporation (NYSE:DDD) is an early mover. In principle, there’s nothing wrong with the company. Just like the size of the market, 3D Systems Corporation (NYSE:DDD) is showing an amazing growth rate. Sales increased 31% to $102.1 million in the first quarter compared to last year, and were driven by a 61% increase in sales of printers and other products. The company is also about to launch new products that shall support its growth.

The problem with 3D Systems Corporation (NYSE:DDD) is not the company or industry itself. Too many investors got interested in the stock way too early, and this has caused the stock to become rather expensive due to a sudden increase in demand. The company’s stock is currently trading at 105 times its trailing earnings, with a forward price-to-earnings ratio of 37.3 according to Morningstar. To sustain this ratio in the middle run, 3D Systems Corporation (NYSE:DDD) will have to perform really well in terms of sales and profit, which is feasible in the long run but may be quite a challenge to achieve in the next two quarters. To see how relatively high the price-to-earnings ratio of the company is, just remember that the average ratio of the whole industry is 17.6 according to Morningstar.

Even though the current valuation may not look attractive, this stock has a strong exposure (it is said to have 16% of total market share) to one of the most promising industries of our decade and is therefore worth watching.

The company recently announced its acquisition of MakerBot, a desktop 3D printer manufacturer in Brooklyn. This suggests that Stratasys, Ltd. (NASDAQ:SSYS) is very interested in marketing its products directly to the consumers. This is quite strategic as the company has so far been focused largely on the enterprise market, becoming a leader in that segment. Its enterprise machines sell for $10,000 to $600,000 and are sold mostly through resellers.

The downside of so much good news recently is that the company’s current valuation is also stratospheric. The company’s price-to-earnings ratio stands at 145.34, which is even higher than 3D Systems.

ExOne Co (NASDAQ:XONE) went public just four months ago at $14-$16 per share, and since then it has experienced a massive 130% share price increase. Manufacturing 3D printers since at least 2001, ExOne Co (NASDAQ:XONE) chose a good time for its IPO. Considering that the company made about $50 million in sales and around $1.5 million in net income, the company’s current market capitalization of $820 million implies that it is trading at more than 12 times its enterprise-value-to-sales ratio which suggests that this isn’t a good time for buying shares.

Is Microsoft Corporation (MSFT) the Missing Link in the 3D Printing Revolution...