3 Ways to Profit from the U.S. Debt Crisis that Wasn’t: Exelon Corporation (EXC) and More

The biggest and most overblown fear factor circling the economy these days is that the U.S. faces a looming and inevitable debt crisis that will rival that of Greece.  Interest rates will soar and the depression will start.  Barron’s recent cover, “Next Stop, Greece” pumps up this false fear.

Don’t fall prey to these false claims.  They have been ongoing for decades and will continue to go meritless in the next decade as well.  In fact, it is likely that interest rates will continue to hug zero for longer than many anticipate.  At some point there will be some interest rate normalization — a real risk to both stocks and bonds — but this will likely come later than many expect.

Given the resilience in the U.S. economy many are wondering if the Fed will raise rates sooner than 2015.  Don’t count on it.  Below are three industries poised to outperform amid continued low interest rates.

The United States is the sole monopoly supplier of its currency.  THIS MATTERS.  Greece owes debt in Euros for which it cannot print.  This doesn’t imply that structural economic imbalances will not develop, but it does take off the table all the fears of bankruptcy, fiscal crisis, etc.

Japan’s debt funding situation is like the United States and they are in a more advanced state with debt/GDP at 218% versus 76% for the U.S.  Where is the fiscal crisis for the Japanese government bonds?  Some are again speculating that now is the time, but they will likely be proven wrong again.  Look at the chart below on the Japanese 10-year government bonds.  Where is the crisis?  That is a yield of 0.74% with a debt/GDP at 218%.  The yield is being driven by demographics, slow growth, and persistent deleveraging in the system — NOT the debt/GDP ratio.

This doesn’t mean that Treasuries are not way overvalued, just that return OF investment is an absolute certainty.  Return ON investment, especially real returns, for government bonds is likely to be substantially below that of equities.  The main investment implication is that yieldy investments will continue to maintain their relative attractiveness to both Treasuries and corporate bonds.  If interest rates start rising, then it reduces the appeal of industries such as utilities, REITs, telecommunications, MLPs, and other asset classes with yield appeal.  However, this scenario is unlikely to play out for at least several years.

Exelon Corporation (NYSE:EXC) makes for a great investment amid continued low interest rates.  The company is a leading utility with operations in 47 states.  They distribute the largest dividend yield among large-cap utilities at 6.8%, which is substantially above the sector average of 4%.  The company is well positioned toward regulatory change limiting greenhouse gas emissions given that they are the largest nuclear operator in the U.S. along with their low coal exposure.   The stock is also attractively valued with a price to tangible book ratio at five-year lows. 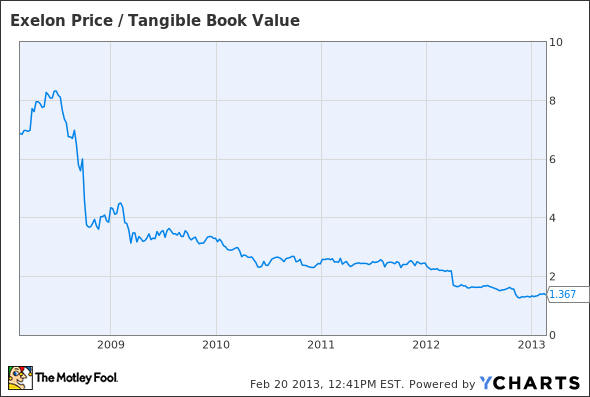 MLPs have ridden a decade-long surge in demand that has pushed up prices and depressed yields.  Still, the sector has appeal as I outlined in late November.  For an update, the Alerian MLP ETF has an indicated dividend yield of 6.06% versus a 4.89% yield on the Moody’s Corporate Baa Index.  This has compressed in recent months, but the 117 basis point premium still remains well above the historical average of 65.  And more importantly, Alerian MLP has returned +7.5% since the article versus a NEGATIVE return for investment grade corporate bonds.