3 Reasons SunPower Corporation (SPWR) Is Leading the Charge in Solar

Shares of SunPower Corporation (NASDAQ:SPWR) are exploding higher again today, continuing a wild run the stock has been on since late 2012. SunPower hasn’t been the only stock moving higher over the past three months, but it is one of the biggest movers.

First Solar, Inc. (NASDAQ:FSLR) has also moved higher as sentiment for solar has improved, but not in the same fashion. Suntech Power Holdings Co., Ltd. (ADR) (NYSE:STP) , the Chinese giant, is having a good year as well, although leverage is playing a big role in that. 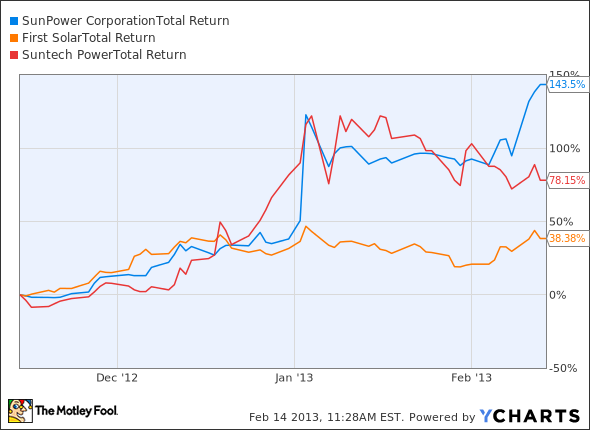 I think this is just the start for SunPower, and here are the three biggest reasons why.

Efficiency
What separates SunPower from the competition is the efficiency of its panels. SunPower has panels that are 21% efficient when most module makers are selling traditional panels in the range of 15% to 16% efficiency. First Solar has conversion efficiency of just 12.7%, which is why the company focuses on projects where it can reduce balance of system costs and make the cost of electricity competitive.

The advantage of efficiency is that you can get more power from the same installation. There’s little need to increase the cost of wiring, inverters, land, or permitting — just use a more efficient panel. As the cost of panels have become a smaller percentage of the total cost to install solar this is a key, particularly in the residential market.

GTM Research estimated that the average cost for a Chinese best in class solar module during Q4 was $0.59 per watt. That would be a component cost that goes into an installation that on average costs $5.21 per watt in a residential setting, or $2.40 per watt for utility scale (Q3 2012 the latest available). If the cost of the module is a relatively small percentage of the total installation cost, it’s worth upgrading to a more efficient one, even if it’s more expensive. I ran through an example that illustrates how a more efficient panel will actually save money in an article found here.

Balance sheet
SunPower doesn’t have the best balance sheet in the world, but compared to other solar manufacturers, it looks like a model citizen. Cash stands at $504 million with $839 million in debt. Keep in mind that non-GAAP gross margin stood at 18.7% last quarter.

Compare that to Chinese rivals, and SunPower looks great. Suntech Power had net debt of $1.6 billion as of the first quarter of 2012, the last time we got detailed financials. Considering that the company has lost tens of millions since then, it’s safe to say the balance sheet has gotten worse.

Yingli Green Energy Hold. Co. Ltd. (ADR) (NYSE:YGE) had $1.9 billion in net debt as of the third quarter and reported a negative gross margin of 22.7%.

LDK Solar Co., Ltd (ADR) (NYSE:LDK) makes even Chinese companies look bad, with $2.7 billion in net debt and a negative 11.2% gross margin. There’s no way the company can dig out of that hole without a handout from the Chinese government.

These three stocks have risen along with SunPower over the past three months, but they show no signs of making a profit, and they have no discernable way to pay off current debt loads. SunPower, on the other hand, has relatively little debt, positive margins, and the backing of oil giant Total even if times get tough.