I’ve watched Chipotle Mexican Grill, Inc. (NYSE:CMG) for several years, and actually owned the shares for a while myself. The company reported earnings about a month ago, and the stock has risen about 15% from its short-term low. What’s ironic is, the company has three problems that investors seem to be ignoring.

There Are Two Types Of Companies
In the restaurant industry, there are two types of companies in my eyes. On the one hand, you have large companies that are established on multiple continents like McDonald’s Corporation (NYSE:MCD) and Yum! Brands, Inc. (NYSE:YUM). These two companies have over 30,000 locations each, generate huge free cash flow, and are expected to get much of their growth in the future from overseas expansion. Investors buying McDonald’s get a yield of over 3.2%, and expected earnings growth of 8.7%. YUM Brands’ investors are expecting 12% earnings growth, and collect a 2% yield.

The other type of restaurant is typified by both Chipotle and Panera Bread Co (NASDAQ:PNRA). Both of these companies have established brands and are rapidly expanding. While dividends are popular, with analysts calling for 20% EPS growth at Chipotle and 19% EPS growth at Panera, you can see the lack of a dividend isn’t a huge deal.

However, as with all growth stocks, if a company can’t meet or exceed analyst expectations, the shares can take a beating. This happened with Chipotle before when the company reported “disappointing” 8% growth in comparable store sales and investors expected more. The company actually did worse in the current quarter, but the shares went up. What’s going on here?

Expectations Are Everything
Investors who believe in Chipotle would say the company has just scratched the surface of the brand’s appeal, and the new ShopHouse concept has worldwide appeal as well. They expect Chipotle to have years of fast growth ahead, and this justifies the current price.

There are a few holes in this theory. First, Chipotle’s same-store sales growth seems to be in a free fall. Look at the company’s results over the last several quarters. 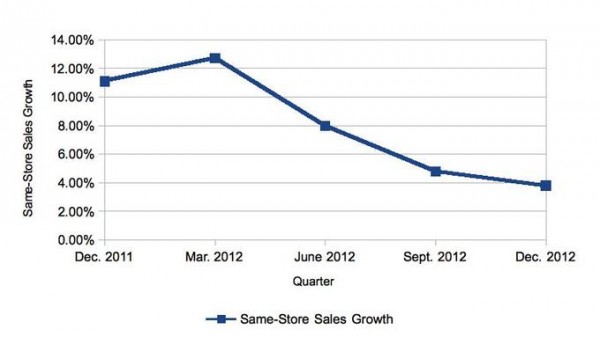 The third issue Chipotle needs to address is their falling margins. In the current quarter, their competitor McDonald’s led most of the restaurant industry with an operating margin of 31.98%. YUM Brands performed well also, showing an 18.80% margin. Chipotle used to beat Panera on margins because of their more limited menu, and smaller staff. However, this lead has been extinguished as Panera’s operating margin of 14.5% nearly matched Chipotle’s margin of 14.6%. The fact that Chipotle’s operating margin has fallen from 16.7% at the beginning of 2012 to 14.6% shows a significant deterioration.

A Few Losers on a Mixed Market Day: McDonald’s Corporation (MCD), The Boeing...