Activist investor Carl Icahn emerged with an alternative plan this week. He bought 100 million shares to build a 6% ownership stake in the company and asked Dell Inc. (NASDAQ:DELL)’s board of directors to issue a huge $9 dividend per share if Michael Dell’s offer falls through. A payout this big would require Dell Inc. (NASDAQ:DELL) to raise cash by taking on $5.3 billion of new debt, which classifies Icahn’s proposal as a leveraged recapitalization.

The proposed action keeps Dell Inc. (NASDAQ:DELL) on the open market and values the company at nearly $40 billion — a 67% premium over the existing offer. It’s been a while since Dell fetched a market cap of that caliber. Dell Inc. (NASDAQ:DELL)’s special committee takes the idea seriously and promised to “secure the best result for Dellas public shareholders — whether that is the announced transaction or an alternative.” 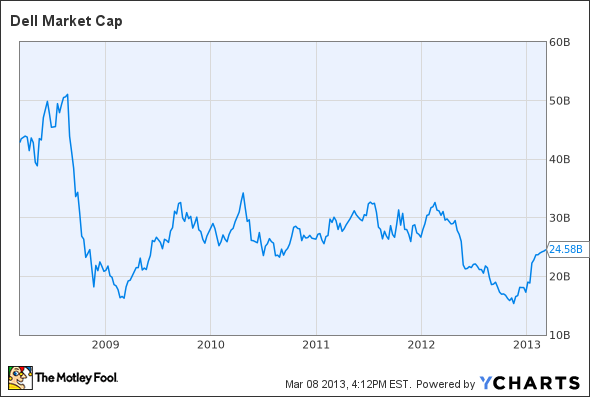 Icahn’s involvement is a minor surprise, if only because the guy seems awfully busy with large bets on digital entertainment and herbal diet shakes right now. But the size, the scale, the sheer magnitude of Icahn’s proposal pushes his idea right into shock-and-awe territory. I did not see this one coming.

2. Pandora is alive!
Internet-radio maven Pandora Media Inc (NYSE:P) delivered a strong fourth-quarter report on Thursday night, sending shares on a 25% rocket ride the next day. The intraday highs of $14.70 per share have not been seen since November 2011.

The report was packed with good news:

The company is turning a corner right here, and the future is so bright, CEO Joe Kennedy’s gotta wear shades … as he lounges by the pool, free from the everyday drudgery of running a digital media business. You see, the longtime CEO also announced his plan to retire later this year.