Is 21Vianet Group Inc (NASDAQ:VNET) going to take off soon? Hedge funds are betting on the stock. The number of bullish hedge fund positions went up by 2 lately. Our calculations also showed that VNET isn’t among the 30 most popular stocks among hedge funds.

What have hedge funds been doing with 21Vianet Group Inc (NASDAQ:VNET)?

Heading into the fourth quarter of 2018, a total of 13 of the hedge funds tracked by Insider Monkey were long this stock, a change of 18% from one quarter earlier. On the other hand, there were a total of 7 hedge funds with a bullish position in VNET at the beginning of this year. With hedgies’ positions undergoing their usual ebb and flow, there exists a few key hedge fund managers who were adding to their holdings meaningfully (or already accumulated large positions). 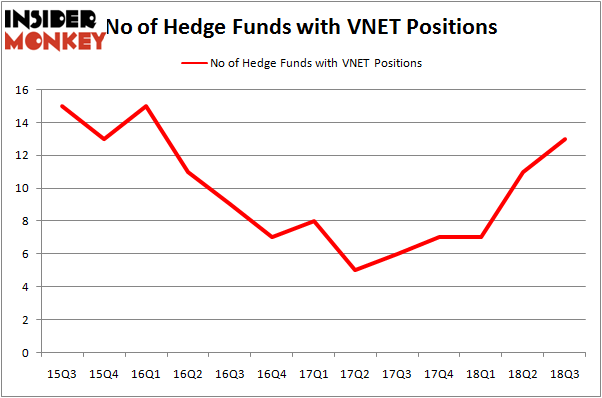 Among these funds, Renaissance Technologies held the most valuable stake in 21Vianet Group Inc (NASDAQ:VNET), which was worth $9.6 million at the end of the third quarter. On the second spot was Dalton Investments which amassed $5.4 million worth of shares. Moreover, Sylebra Capital Management, D E Shaw, and Millennium Management were also bullish on 21Vianet Group Inc (NASDAQ:VNET), allocating a large percentage of their portfolios to this stock.

Let’s go over hedge fund activity in other stocks – not necessarily in the same industry as 21Vianet Group Inc (NASDAQ:VNET) but similarly valued. These stocks are Alder Biopharmaceuticals Inc (NASDAQ:ALDR), The Buckle, Inc. (NYSE:BKE), Chase Corporation (NYSEAMEX:CCF), and CTS Corporation (NYSE:CTS). This group of stocks’ market values are closest to VNET’s market value.

As you can see these stocks had an average of 11.75 hedge funds with bullish positions and the average amount invested in these stocks was $148 million. That figure was $27 million in VNET’s case. Alder Biopharmaceuticals Inc (NASDAQ:ALDR) is the most popular stock in this table. On the other hand Chase Corporation (NYSEAMEX:CCF) is the least popular one with only 6 bullish hedge fund positions. 21Vianet Group Inc (NASDAQ:VNET) is not the most popular stock in this group but hedge fund interest is still above average. This is a slightly positive signal but we’d rather spend our time researching stocks that hedge funds are piling on. In this regard ALDR might be a better candidate to consider a long position.

Is Heartland Express, Inc. (HTLD) A Good Stock To Buy?
Monthly Newsletter Strategy
Download a free copy of our newsletter and see the details inside!
Hedge Fund Resource Center
Related News
Hedge Funds Are Dumping 21Vianet Group Inc (VNET) Should You Get Onboard the Hype Train for 21Vianet Group Inc (VNET), Vereit Inc (VER) And 2 Other Stocks? 5 Major Nasdaq Stocks That Hit 52-Week Lows This Week Here’s Why These Stocks Are Trading Lower on Wednesday Why Kohl’s, Himax, 21Vianet, YY Inc and Netflix Are Tumbling Today Here’s What You Should Know about These Five Advancing Stocks Hedge Funds Aren’t Crazy About 21Vianet Group Inc (VNET) Anymore 11 Best Inexpensive Bourbons Under $25 That Don’t Taste Cheap 10 Best Vacation Spots for Singles in Their 40’s 15 Highest Paid YouTubers of 2018
Billionaire Hedge Funds