Intel Corporation (NASDAQ:INTC) has been receiving a lot of attention lately, mainly due to its strong ultra-book sales and its upcoming Haswell series. Analysts at Lazard recently upgraded Intel citing that ultrabook sales will further increase in 2013, which will further drive up Intel’s revenue from its mobile processors. But Intel is not my stock pick. Ultrabooks come equipped with Solid State Drives (SSD), and strong ultrabook sales present bullish prospects for SSD manufacturers.

According IHS iSuppli Storage Space Market Brief, SSD shipments could increase to 83 million units in 2013 and 239 million units by 2016 (over 65% CAGR). The report also suggested that SSD shipments are well on track to deliver a 100% growth rate in 2012 on a YoY basis. Altogether this presents a bullish case for NAND chip manufacturers like Seagate Technology PLC (NASDAQ:STX), OCZ Technology Group Inc. (NASDAQ:OCZ) and SanDisk Corporation (NASDAQ:SNDK).

Seagate has been manufacturing Hard Disk Drives (HDD) for a long time, but it was only in the past few years that the company went on to manufacture SSDs and hybrid disks. Amongst the mentioned peers, shares of Seagate have risen the most over the last 1 year, owing to growth in both SSD and HDD shipments. Digital content creation is at its peak, and with the introduction of 4k resolution, more storage space would be required.

According to IHS Isuppli,”The HDD industry will face myriad challenges in 2013. Shipments for desktop PCs will slip this year, while notebook sales are under pressure as consumers continue to favor smartphones and tablets. The declining price of SSDs also will allow them to take away some share from conventional HDDs.” 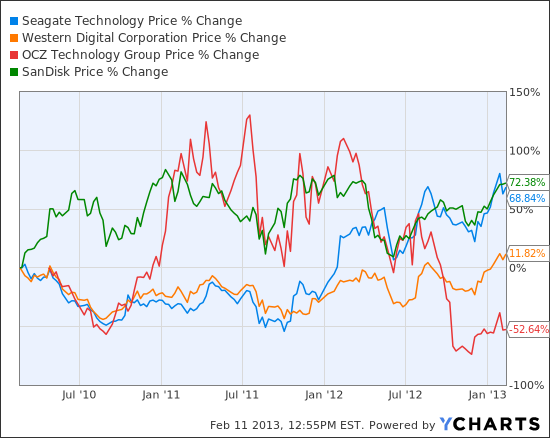 Both Seagate and Western Digital Corp. (NASDAQ:WDC) derive a major share of their revenues from HDD shipments, and the latest IHS Isuppli statistics suggests that the HDD manufacturers could have a dull year ahead. Shares of Western Digital trade at modest forward P/E but a high PEG indicating that its shares are overvalued w.r.t its growth prospects. Analysts estimate its EPS to shrink by 1.14% in 2013.

But Seagate still looks attractive. Last year, Seagate had acquired Samsung’s disk drive business and recently the company announced that it would be expanding its SSD line up. Moreover, its management also announced that it is working jointly with Vrident to develop PCIe SSDs for data centres.

It’s a well-known fact that SSDs are taking over, but their high cost/GB has been a major deterrent for its adoption. The costs were high due to Thai floods. However SSD prices have declined significantly over the last 6 months, down from $0.9/GB to $0.47/GB, and that’s a nearly 50%.