2 Stocks to Own for the ‘Super WiFi’ Era

Roughly a decade ago, consumers finally realized they were truly addicted to the Internet.

If you spent a few days offline, without checking e-mail or favorite websites, then withdrawal symptoms began to occur. More recently, we’ve become dependent on a new fix: “WiFi.” As we roam towns and cities, or simply like to surf the Web from the comfort of our own bed, a wireless Internet connection has become a necessity — especially when our employers want us to remain in constant contact.

Trouble is, we’ve all had experiences with unstable WiFi connections. It’s no fun to watch an online video, only to see it continually pause as the data buffer rebuilds. Considering how many consumers are “cutting the cord” from cable companies to watch their favorite shows and movies online, slow WiFi connections just won’t cut it.

Thankfully, help is on the way. A wide range of technology companies are finalizing the standards to deliver what’s known as WiFi 802.11ac. You don’t need to know what those numbers and letters mean. You only need to know that it’s fast — really fast.

Right now, you’re probably using a WiFi standard known as 802.11n. This technology is capable of transmitting data at around 150 megabits per second (or up to 450 mbps if the router has three antennas). 802.11ac is three times faster, meaning it can transmit up to 1.3 gigabytes per second (if three antennas are used). Even with just one antenna, the 450 mbps speed is fast enough to deliver multiple streams of high-definition video without delays. Simply put, it willbe impossible to discern a difference between an Internet connection that is plugged directly into a cable modem and one connected to WiFi.

Not only is this technology faster, it can carry a signal over farther distances, and the chips used to transmit data consume less power than previous iterations of WiFi.

Although consumers will begin to adopt this new version of WiFi during the coming 12-18 months, investors will begin handicapping the best ways to play this trend right away. That’s because the companies that make the chips, routers, software and other gear are starting to see orders flow in. By the time we hit the fourth-quarter earnings season in late January, expect to hear a lot more about WiFi 802.11ac rollouts and their effect on 2013 and 2014 growth rates.

These companies have the same growth opportunity: They each supply communications chips to leading smartphone and tablet makers, and each has refreshed their product lines to handle the burgeoning WiFi 802.11ac market. This technology actually requires a higher number of communications chips, as it can better identify the direction of the device catching the signal, and use multiple antennas to focus the signal in that direction, rather than omnidirectionally, as previous versions of WiFi have done.

It’s not as simple as building a WiFi chip. These firms actually sell a range of radio-frequency (RF) chips, handling tasks such as switching, filtering, power amplification, low-noise amplification. These chips use gallium arsenide (GaAs) rather than silicon, thanks to the material’s ability work efficiently at higher frequencies. So companies such as RF Micro Devices and Skyworks don’t have to duke it out at the low end of the chip-making process chain, as GaAs development requires a higher level of expertise.

My colleague Jim Woods recently noted that Skyworks is well-positioned to ride herd on Apple Inc. (NASDAQ:AAPL) sales growth, as Skyworks’ chips are finding home in an increasing number of Apple’s products. Skyworks is well-trenched with Samsung, QUALCOMM, Inc. (NASDAQ:QCOM) and others as well. 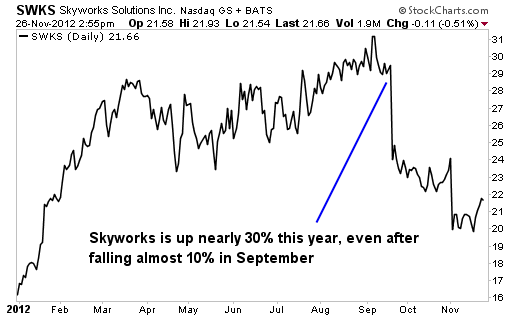 Shares of Skyworks surged toward the $30 mark this past summer on expectations of yet further share gains in the RF space, which by some estimates, had approached 40%. Yet as Jim noted, concerns about Skyworks’ role in the new Apple iPhone 5 have knocked the stock down, even as those fears appear misplaced.

A half-decade ago, RF Micro was the industry darling with leading market share (which ultimately peaked at 36%). RF Micro’s market share has since fallen by half, largely because the company was closely aligned with Nokia Corporation (NYSE:NOK), which was eventually eclipsed by Apple and Samsung.

Yet RF Micro has a good shot of taking back market share in coming quarters, if its “PowerSmart” approach takes root. This is RF Micro’s all-in-one approach to RF chip sets, which enables customers to buy one integrated chip solution, rather than try to cobble together chips from various vendors. (Skyworks’ chips, for example, work in tandem with chips offered by Intel Corporation (NASDAQ:INTC) and Qualcomm). Analysts have been steadily raising their fiscal (March) 2013 and 2014 sales and profitforecasts for RF Micro, thanks in part to the looming WiFi upgrade cycle.

Risks to Consider: The wireless telecom sector will benefit from a solid upgrade cycle — if consumers are feeling flush. Recent signs are encouraging, but an economic slowdown may slow the uptake of discretionary electronic devices.