The US continues to strive towards energy independence, and the Bakken shale figures prominently in that goal. Investing in the Bakken shale by no means guarantees returns. Drilling in this shale is expensive and not all exploration companies turn a profit. Below are examples of success and struggle in Bakken shale energy production and an alternative, safer investment in the Bakken play. 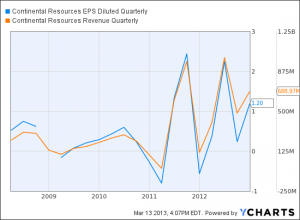 The latest earnings report brings good news on both revenues and earnings. In particular, 2012 earnings improved 72% over 2011.This easily exceeded analysts estimates. Q4 2012 saw record production with 2013 production likely to exceed that. Production costs for existing wells declined and will likely continue declining. 122 wells currently await completion, compared to 62 at the end of 2011. Proved reserves increased 54% over 2011 inventory.

Best of all, Continental Resources Inc. (NYSE:CLR) sees continued improvement in profit per barrel courtesy of improved rail transportation. Continental ships more than 70% of its Bakken crude via rail to coastal refineries and derives superior prices for its product compared to pipeline transit. The “cherry on top” may be a new oil play in southern Oklahoma that delivered promising initial results. Continental looks solid.

Revenues, some earnings but no capital gains, I’ll pass

On the other hand, Kodiak Oil & Gas Corp (USA) (NYSE:KOG) attracts some attention, but I see something wrong. The company produces oil and gas and generates revenues, but unlike Continental, earnings fluctuate instead of paralleling revenues. Even worse, Kodiak experienced virtually no capital gains for the past year or so. The company’s latest annual earnings report sounded terrific, but despite huge increases in revenue, net income, and proven reserves, the stock barely budged. 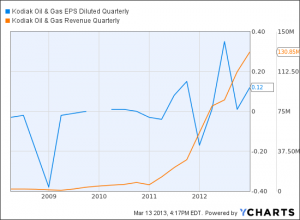 Additionally, during the conference call, CEO Lynn Peterson suggested that production guidance could change as the company experiments with new production methods. If these new methods work, significant production improvement could be realized, but only in the back half of 2013. I suspect this uncertainty played a significant role in the muted stock response to a favorable earnings report.