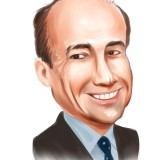 Joel Greenblatt isn’t a household name like Warren Buffett, but he’s well known in the value investing community. He has written several books on investing, including You Can Be A Stock Market Genius, and has been developing a “Magic Formula” quantitative strategy. Some of his investing activity is reported to the SEC (and then released to the general public) in 13F filings about seven weeks after the end of every quarter (see what stocks Greenblatt was long during the third quarter). Here are our views on the five largest positions disclosed on the 13F for the end of September:

Greenblatt cut his stake in United Therapeutics Corporation (NASDAQ:UTHR) but the stock was still his largest position by market value at about 280,000 shares. United Therapeutics is a $2.6 billion market cap drug manufacturer whose products are generally aimed at treating hyptertension. Its earnings were down somewhat last quarter compared to the third quarter of 2011, but the valuation multiples look quite good with trailing and forward P/E multiples of 10 and 9, respectively. It looks like an interesting value opportunity and we’d be interested in trying to learn more about the company.

GameStop Corp. (NYSE:GME) was another of Greenblatt’s top picks with his Gotham Asset Management reporting a position of about 730,000 shares. PC and video game sales have been down, and digital distribution has been gaining market share, with the result being a slump in sales at GameStop compared to a year ago. The most recent data shows that half of the shares outstanding are held short. At a market cap of $3.2 billion, the stock trades at only 8 times forward earnings estimates but we don’t like the industry dynamics and think that we’d avoid this pick.

Greenblatt’s stake in Cisco Systems, Inc. (NASDAQ:CSCO) increased by 12% to a total of about 800,000 shares. Cisco looks remarkably cheap at only 12 times trailing earnings, with considerable revenue and earnings growth over the last year and Wall Street analysts expecting further earnings growth in 2013 (the forward P/E is only 9). Billionaire Ken Fisher’s Fisher Asset Management also increased its holdings of Cisco during the third quarter and closed September with 38 million shares in its portfolio (find more stock picks from Fisher Asset Management). We think that it’s a good stock to buy as it appears fairly valued for a no-growth case, and even modest growth would make Cisco undervalued.

Gotham also added shares in Dolby Laboratories, Inc. (NYSE:DLB). Dolby is another troubled company: in its most recent quarter, net income was down 35% from the same period in the previous year. Even the sell-side is pessimistic on the company, with forward earnings estimates being below what Dolby has done on a trailing basis. The forward P/E multiple is 15, which doesn’t look too attractive for a shrinking company, and there’s considerable short interest here with 16% of the outstanding shares held short. Given this, it doesn’t look like Dolby is a good buy.

Greenblatt kept his position in Raytheon Company (NYSE:RTN) about constant at close to 250,000 shares. Raytheon’s business was about flat in the third quarter versus a year earlier, but the market is worried that cuts in U.S. military spending will hammer the defense contractor. As a result it carries a trailing P/E of only 10 and pays a dividend yield of 3.7%. It also looks reasonably priced on an enterprise value basis, with an EV/EBITDA multiple of 5.5x. AQR Capital Management, which is managed by Cliff Asness, initiated a position in the company during the third quarter (see more new stock picks from Cliff Asness) and we’d suggest comparing Raytheon to its peers as it looks like the entire aerospace and defense industry may be facing low expectations due to plans to cut spending.

How Does Microsoft Need To Do Vs. Apple Inc (NASDAQ:AAPL)?