The chart below shows the stock performances for all three companies over the past year. 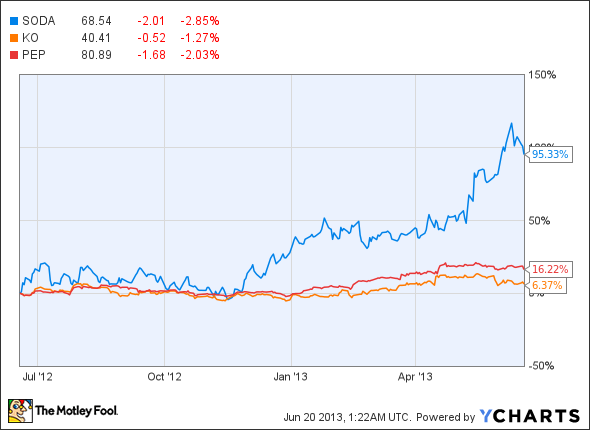 This chart might make it tempting to choose SodaStream versus its more established peers. However, what about valuation? 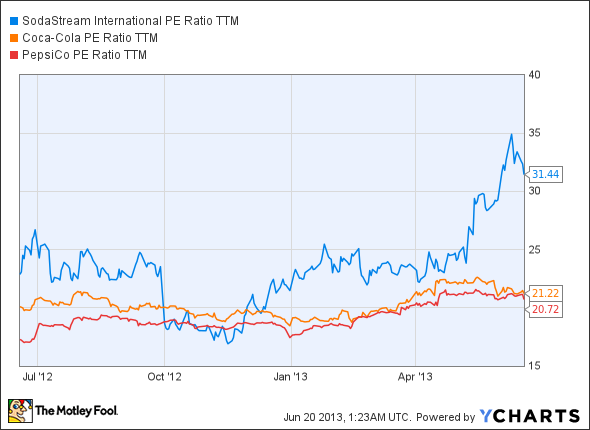 You’re paying a premium for SodaStream. The good news: SodaStream has the potential to meet or exceed its current expectations. Also, unlike most growth companies, SodaStream isn’t using a ton of debt to fuel its growth. It has an impressive debt-to-equity ratio of 0.03 versus an industry average of 0.60.

In early June, an Israeli newspaper ran a story suggesting that was interested in acquiring SodaStream. Pepsi quickly denied the rumor. However, if we look a little closer to the situation, it would make sense for Pepsi or The Coca-Cola Company (NYSE:KO) to acquire SodaStream.

SodaStream has seen excellent growth, and its expanding its partnerships. For example, Samsung now has two refrigerators with SodaStream units embedded in them, and SodaStream inked a deal with KitchenAid, a subsidiary of Whirlpool Corporation (NYSE:WHR). The former will increase visibility and word of mouth, and the latter will solidify SodaStream as the market leader in home soda.

These deals help aid SodaStream’s current momentum and make SodaStream more of a long-term threat to Pepsi and Coke. Many analysts suggest that an appliance manufacturer is a more likely acquirer of SodaStream. That might be the case, but that wouldn’t help Pepsi or Coke. In other words, SodaStream isn’t a threat to an appliance manufacturer. An acquisition would be affordable for Pepsi or Coke, and it would act as a defensive play with upside potential.

If you’re looking for safety while also collecting dividends, then The Coca-Cola Company (NYSE:KO) and Pepsi are better options. Still, SodaStream has a lot going for it, and the growth potential is excellent. Its short position is likely high because SodaStream is trading at a lofty 33 times earnings. If the broader market suffers a steep correction, investors and traders will quickly exit high-growth yet expensive positions like this one.

However, as long as the broader market remains afloat (or better), SodaStream is likely to remain a winner.

The article Will This Soda Company Pop or Fizzle? originally appeared on Fool.com.