Why You Should Consider Converting Your Shorts Into Long: PPG Industries, Inc. (PPG), Sherwin-Williams Company (SHW), The Valspar Corporation (VAL)

The shorts are losing confidence in their wagers; at least that’s what PPG Industries, Inc. (NYSE:PPG)’s  latest short interest data suggests. Between Jan. 31 and Feb. 15, PPG Industries, Inc. (NYSE:PPG)’s short interest plunged 60.9%. From nearly 36 million shares sold short in January, it was down to about 14 million shares on last count. It simply means the majority who short sold the stock in anticipation of lower prices closed out their positions during the time frame. A clear sign of optimism, isn’t it?

So what’s the wind behind PPG?

It has to be the deals. Two recent moves PPG Industries, Inc. (NYSE:PPG) made — one big and one gigantic — could change its fortunes forever. And that’s what the market is willing to bet on. Before trying to figure out what these deals can do to PPG’s top and bottom lines in the future, let’s see how it has fared so far. 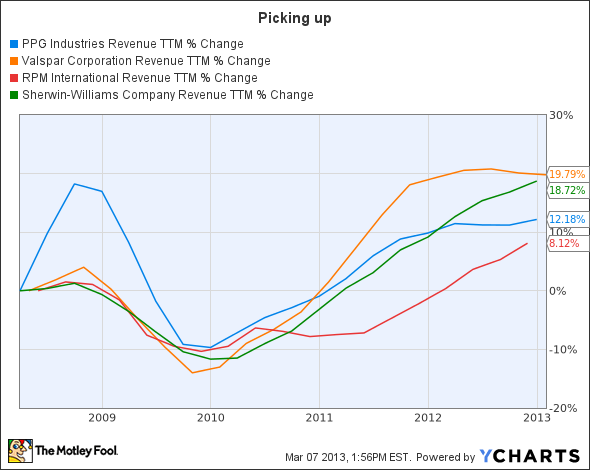 PPG grew revenue a little over 12% over the past five years, which sadly isn’t the best in the industry. The Valspar Corporation (NYSE:VAL)’s has picked up since 2011, though last year wasn’t as good for the paint retailer as sales remained flattish. The scene was very similar at PPG’s: decent growth in 2011 followed by an insignificant 2% rise in 2012 sales. Sherwin-Williams Company (NYSE:SHW) was the underdog of 2012 with sales climbing 9% to hit record highs year on year, backed by rising volumes and prices, as well as acquisitions. The laggard RPM International Inc. (NYSE:RPM) outperformed last year with the best growth in top line of around 4%.

Where RPM wins hands down though is its net profit growth in the past five years – it has more than doubled. Comparatively, PPG’s bottom line gained 27% while The Valspar Corporation (NYSE:VAL) did much better with 85% growth. Interestingly, Sherwin lost this game, registering just 7.6% improvement in the bottom line.

So PPG stands somewhere midway as far as operational performance is concerned. It’s not great, but it isn’t bad either. Now this is what can change about PPG in the years to come, thanks to the deals.

The first deal was actually a de-clutter move. In a bid to narrow focus on its coatings business, PPG recently spun off its commodity chemicals business (that included products like caustic soda and chlorine) to Axiall Corp (NYSE:AXLL). The deal process is too complicated to be discussed here, but it reportedly makes PPG’s cash box heavier by $900 million, while diluting its outstanding shares by around 7%.

The second one is a monster deal, one that will shape PPG Industries, Inc. (NYSE:PPG)’s future. It is all set to take over AkzoNobel’s architectural coatings business within the next few months. Akzo’s is a huge business with more than 10,000 ‘customer touch points’ across the U.S. and Canada, which includes own stores, offering through retail outlets, and distributors. Akzo currently leads in Canada and holds the second spot in the U.S. in the coatings market. So where does this billion-dollar deal take PPG?

Eye on the crown

If I chipped off PPG’s commodity chemicals business and add Akzo’s to its actual 2011 sales mix, it would look something like this: Sales contribution from PPG’s coatings business would jump to 85% from 73% actual. Of the rest, 7% would be glass business, and the remaining 8% would remain with the optical and specialty material business.