Why JPMorgan Chase & Co. (JPM) Is Up Smartly Today

JPMorgan Chase & Co. (NYSE:JPM) climbed 2% today, after a 0.54% increase in overnight trading. This is the second good day in a row for the nation’s biggest bank, after the previous week’s drop of 2.48%. Considering some of the challenges it’s facing, this is nothing short of a small miracle.

Big-four roundup
But before we dive into that, let’s have a look at where JPMorgan Chase & Co. (NYSE:JPM)’s peers and the markets ended up today: 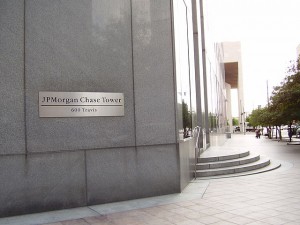 As I wrote yesterday, JPMorgan Chase & Co. (NYSE:JPM) has had a run of less-than-ideal news:

Co-CEO Frank Bisignano resigned at the beginning of last week to run a payments processor.

The New York Times discovered that the Federal Energy Regulatory Commission is investigating the superbank for possibly rigging energy markets in California and Michigan — calling out commodities head Blythe Masters in particular as having lied under oath about the matter.

CEO Jamie Dimon is facing a proxy vote at the May 21 shareholders meeting to split the roles of CEO and chairman of the board at JPMorgan.

Adding insult to injury, the influential shareholder-advisory group Institutional Shareholder Services has backed the idea of splitting Dimon’s roles at the bank, as well as called for the removal of three of its board members. All of this is a response to JPMorgan Chase & Co. (NYSE:JPM)’s London Whale trading scandal, which cost the bank more than $6 billion.

So why are investors showing JPMorgan the love today? It could be they’re swooning over the love Berkshire Hathaway Inc. (NYSE:BRK.B) CEO Warren Buffett recently showed Jamie Dimon. The Oracle of Omaha weighed in on the proxy vote, saying he felt Dimon should stay in both roles at JPMorgan. Buffett also added that he held JPMorgan stock in his personal portfolio.

More than just strong words of support from Buffett for Dimon — personally holding JPMorgan Chase & Co. (NYSE:JPM) stock and touting the fact are strong actions. So investors could still be riding the high of that news. I know I am. Or it could just be a general bounceback of the stock. The market can move like a herd, and investors can easily get swept up in the crush.

Which is why The Motley Fool stresses long-term thinking: Buy and hold, which is the same way Buffett invests, while we have St. Warren on the brain. Focus on the fundamentals of the companies you’re invested in, and leave the hourly ticker check-ins to the day traders. Your portfolio will thank you, even if your broker won’t.

The article Why JPMorgan Chase Is Up Smartly Today originally appeared on Fool.com and is written by John Grgurich.