Why Citigroup Inc. (C) Now Has at Least 30% Upside

Let’s tip the cap to Vikram Pandit. Though he was just shoved out the door as CEO of Citigroup Inc. (NYSE:C), he did a commendable job of fixing a very broken business.

Back in July, I noted that Pandit was re-orienting this banking giant to higher-growth markets. And though the stock has made a nice 38% upward move in the past three months, you can now spot a path for an additional 30% gain from here. 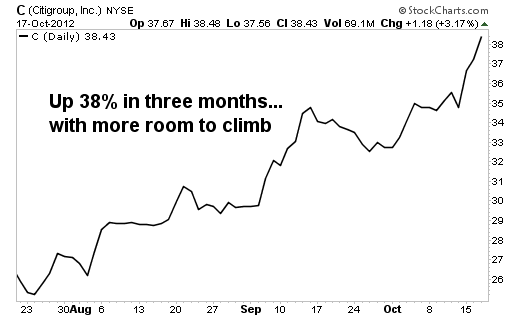 It may take a year or two for this to play out, but shares of Citigroup, which have just hit a 52-week highof $38, could reach $50 or $55 once a couple of near-term pressures — namely Europe and the U.S. “fiscal cliff” — have abated.

A snapshot of third-quarter results shows that Pandit left Citigroup in fighting shape. Earnings of $1.11 per share were roughly 10% ahead of forecasts, thanks in large part to very tight cost controls and better positioning in key markets. As I’ve noted before, Citigroup has been making large investments in its Latin American and Asian units, two especially robust markets. Looking out over the coming decade, Citigroup will likely be seen as the best-positioned U.S. bank in the fastest-growing emerging markets — thanks to Pandit.

Time for a change
Yet even as Pandit has helped Citigroup regain its footing, he’s also made some notable missteps. It was a huge black eye for the company when regulators rejected plans to start a big stock buyback and dividend program. Citigroup didn’t convince regulators that it was in sound financial shape, and the blame has to lie with the CEO. Pandit has also failed to fully complete a series of planned asset sales, and even the assets that have been sold didn’t always fetch top dollar. Case in point: The sale of its 50% stake in the retail brokerage joint venture with Morgan Stanley (NYSE:MS) now looks like a great bargain — for Morgan Stanley.

Merrill Lynch Analyst Erika Penala argues that a decision to replace Pandit with new CEO Michael Corbat will bring “the fresh set of eyes many investors feel [Citigroup] sorely needed.” She adds that Corbat has a strong relationship with regulators — a key consideration as Citigroup tries to re-initiate a big dividend and stock buyback program in early 2013.

Still, Penala says Citigroup provides “an opportunity to buy the one discounted, real recovery story left in U.S. banks — a recovery that we believe is clearly on track, as affirmed by (recent) results.”

Meanwhile, Citigroup’s board of directors has signaled plans to move more quickly in the process of selling Citigroup’s various divisions that have been on the chopping block for several years. Uncertainty over that process has been a key factor in understanding why Citigroup’s stock has traded so far belowbook value in recent quarters. Investors simply didn’t know what the balance sheet would look like when the process is complete. The board appears convinced that the balance sheet already reflects the appropriate eventual price that these assets will fetch.

My take: Once the balance sheet has been fully scrubbed, shares can finally work their way toward book value. Let’s take a quarterly snapshot of Citigroup’s stock price and end-of-period tangible book value.

As you can see, because Citigroup generates profits with each passing quarter, tangible book value has been steadily rising and is on a path to exceed $55 by the end of 2013. Though shares have already risen back up to $38, there’s no reason why they won’t eventually return to tangible book value. (The fact that big banks historically traded at 1.5 times tangible book in the 1990s and through the past decade until 2008 is an argument left for the future.)

Risks to Consider: Citigroup’s upside will need to come from a firming U.S. economy and a recovering housing market, along with sustained growth in emerging-market operations. And the global economy may experience a few more stumbles before settling back into a healthy groove.

Action to Take –> As noted, regulators will take a fresh look at Citigroup’s capital position in the first quarter of 2013, which could finally pave the way for a robust dividend and share buybacks. As long as Citigroup trades so far below tangible book value, buybacks are the preferred path to enrich shareholders. Once the buybacks and dividend hikes are underway, investors will finally stop looking at Citigroup as a troubled lumbering bank. Instead, they’ll see it for what it is: A strong cash-flow generator with an ever-stronger balance sheet.

J.P. Morgan Chase: a whale of a bank