Max Macaluso: It’s been an amazing week for biotech company MannKind. Shares were up more than 4% yesterday, and shares are up more than 30% in the last 5 trading days. Big jumps with small, volatile stocks like this can be common, but the company actually didn’t have any news or catalysts. What’s happening here?

Brian Orelli: Options expire this week, and we’re hitting all-time highs in the Dow. Also they’re getting ready to selecting a new pope in Rome.

None of those have anything to do with MannKind Corporation (NASDAQ:MNKD)’s fundamentals, but I wouldn’t be surprised if they’re influencing the stock price — minus the last one, unless investors are hoping a needle-phobic diabetic pope could be MannKind’s next spokesman — biotechs move for strange reasons.

There’s no reason that MannKind should be moving up this week, but it’s not all that surprising that it’s moved off its lows. The biotech has been dead money since its last FDA rejection. At some point, it becomes worth waiting for.

Macaluso: Usually biotech stocks have a mind of their own and don’t necessarily move with the Dow, but let’s take a look at how the iShares NASDAQ Biotechnology Index‘s performance correlates with the Dow. 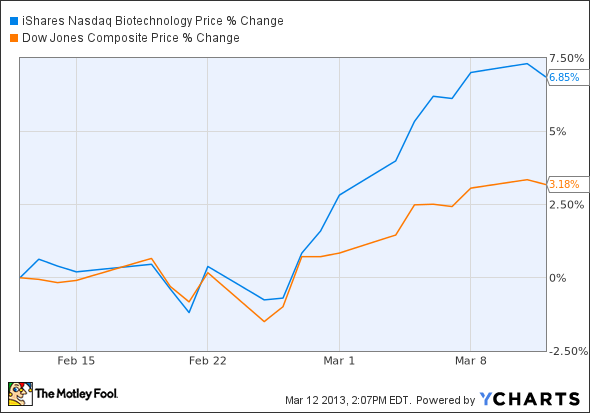 Orelli: Not that surprising. As the generalist investors get excited, the biotech investors get really excited. Unfortunately it works the same way on the way down, too.

Macaluso: So MannKind Corporation (NASDAQ:MNKD) is now perched on a 52-week high. Looking at their cash position, do you think the company needs to raise more capital with a follow-on public offering?

Orelli: Do we really need to look at their cash position? They’ve got a billionaire founder with so much tied up in the company, there’s no way Al Mann is going to let his namesake go out of business at this point.

Macaluso: Well, let’s say does Afrezza get rejected by the FDA again — do you think Mr. Mann will put more money into the company? I know I’d probably call it quits.

Orelli: Me too. But I think Mann is more stubborn than either of us. It obviously depends on the nature of the rejection. Unless it’s clear the FDA will never approve it, I think he sticks with it.

Macaluso: OK, let’s circle back to my previous question: Do you think now is a good time to raise capital with a follow-on public offering?

Orelli: In general, I think biotechs should raise money when they can, not when they need it. By that standard, hitting a 52-week high falls in the “when you can” segment.

But MannKind has already diluted the heck out of its shareholders. Shares outstanding at the company are up 59% since the end of 2010, before the latest FDA rejection. Put another way, a dollar of earnings that a share was entitled to in 2010 — assuming MannKind becomes profitable someday — is only worth $0.63 today.

So I guess my answer is no; MannKind Corporation (NASDAQ:MNKD) shouldn’t raise capital. If the upcoming clinical trials fail — probably unlikely, but anything’s possible — and the company runs out of money, so be it. It makes more sense to raise after the binary events, when the share price is hopefully higher and dilution won’t be quite as painful.

Macaluso: It can be dangerous to assume a drug will get approved because FDA decisions are unpredictable. Take Novo Nordisk A/S (ADR) (NYSE:NVO)‘s Tresiba, for instance. That drug was already approved in Europe and everyone believed it would be a shoo-in with the FDA, but it was handed a complete response letter.

Orelli: Yeah, buying after the run-up is almost never a good idea because in the risk-reward equation, you’ve lost some reward, but the risk is still the same.

Macaluso: So, Brian, what’s the next catalyst that investors need to watch?

Orelli: The two studies the FDA wanted to confirm the new device is the same as the old device are supposed to finish up in May and June, which should allow the company to crunch the numbers and share the data in August. If it can put the reply to the FDA together quickly, a new decision in the second quarter of 2014 seems likely.

And then there’s a potential partnership. But maybe we’re getting a little ahead of ourselves with catalysts. What do you think the chances are of that happening?

Macaluso: Without the stamp of approval from the FDA, I don’t think any of the big pharmas would be interested in partnering on Afrezza. They have all been effected by the patent cliff, and I think that has made the industry more risk-averse. And I’ve talked about this before, but big pharmas have long memories, and I’m sure they remember Pfizer Inc. (NYSE:PFE)‘s attempt to bring Exubera to market. I definitely think Afrezza is a better product, but I don’t see a partnership happening before FDA approval.

Orelli: Me neither. The two other pharmas that were working on inhaled insulin — Novo and Eli Lilly — both dropped their products awhile ago. It’s hard to see them picking it up again. I don’t know who is left. Maybe Merck & Co., Inc. (NYSE:MRK) or the AstraZeneca plc (ADR) (NYSE:AZN)–Bristol Myers Squibb Co. (NYSE:BMY) joint venture. I don’t think either sells insulin products, but maybe they want to expand into later-stage type II diabetes?

Seems like they might have trouble finding a partner even with an approval. MannKind might need to market it themselves first to prove to a pharma that it’s a product patients want.

Macaluso: If Afrezza is approved, I think they’ll have to market it themselves, but it won’t be easy. They don’t currently have a marketing and sales team set up, so they’ll either have to create one or outsource it. Also, I think Dendreon Corporation (NASDAQ:DNDN) and VIVUS, Inc. (NASDAQ:VVUS) investors have seen firsthand how hard it can be for a small biotech company to launch a drug.

But, of course, that’s further down the road. The drug still needs to get approved.

Orelli: I think the diabetes market is larger than Dendreon’s prostate cancer market in terms of number of doctors they have to call on. VIVUS has focused on a select number of high-prescribing doctors, but I don’t know if that’s even possible in the diabetes space. Maybe if you only go after type 1 diabetics? But they’ve lived with it their whole lives. Seems like the target audience for inhaled insulin is new-to-insulin type 2 diabetics.

The article What’s Behind MannKind’s Incredible Run? originally appeared on Fool.com and is written by Brian Orelli and Max Macaluso, Ph.D.