What the Merger Means for the 5th Largest US Airline: US Airways Group, Inc. (LCC)

Just days ago, AMR and US Airways Group, Inc. (NYSE:LCC) announced their much anticipated merger creating the world’s largest airline. After the merger is completed, the new AMR will surpass both Delta Air Lines, Inc. (NYSE:DAL) and United Continental (UAL) to become the world’s largest with just over 20% of domestic market share. Following AMR, Delta, United, Southwest Airlines Co. (NYSE:LUV), and the fifth largest domestic carrier, JetBlue Airways Corporation (NASDAQ:JBLU). Without question, this merger will have major implications for the entire airline industry, not just AMR and US Airways Group, Inc. (NYSE:LCC).

In the past, some have speculated that JetBlue might be an interesting target for a larger airline. In fact, AMR tried to approach JetBlue in late 2012 about a merger. However, JetBlue and CEO Dave Barger showed no interest in a deal. In an interview, Barger told Bloomberg:

We’re just not interested in participating in the consolidation path, either being acquired or in acquiring another company…Independence is our plan today and it’s our path on a go-forward basis.

Of course, JetBlue’s opposition to a merger does not mean one is impossible; a hostile takeover is always a possibility. That being said, a merger is very unlikely given the high concentration of the domestic market. Without doubt, the three largest airlines, AMR, Delta, and United would be unable to obtain regulatory approval to merge with JetBlue. The fourth largest carrier in the U.S., Southwest would also be unlikely to get regulatory approval given its large size. Moreover, Southwest is still busy working to fully integrate Air Tran. Unquestionably, the AMR/ US Airways merger has made it more difficult for JetBlue to merge with another airline but not impossible. JetBlue could still merge with a smaller airline such as Spirit Airlines Incorporated (NASDAQ:SAVE).

Over the long term, the airline industry as a whole will benefit from the AMR/ US Airways merger because it will reduce competition. Less competition should lead to better pricing power for all airlines, including JetBlue. In addition to the removal of one competitor, it is likely that the new AMR cuts capacity, over time, which will lead to a decreased supply of seats. JetBlue, like all other airlines will benefit from the AMR/ US Airways merger. Interestingly, as shown by the chart below, despite rising oil prices, airline stocks have been trading well of late. This is, in my opinion, a result of the past industry consolidation, most recently United & Continental. Currently, the airlines have more pricing power than before and are better able to pass on increases in fuel costs. The benefits for the industry should continue following the completion of the AMR/ US Airways merger. 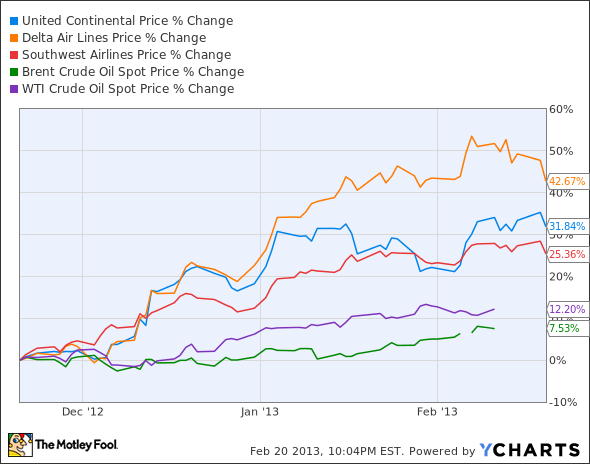 Reports have surfaced indicated that the new AMR will be forced to divest some of its slots at popular airports to gain regulatory approval. Interstitially, JetBlue CEO Dave Barger has said that he is interested in gaining more slots at key airports:

JetBlue would be a logical buyer of slots from the new AMR. In particular, it is likely that AMR will be forced to give up at least some gate slots of Reagan National in DC because both AMR and US Airways currently have a strong presence at the airport. The addition of key slots could serve as a major catalyst for JetBlue going forward.

Over the past year, as shown by the chart below, JetBlue has lagged well behind its larger rivals. 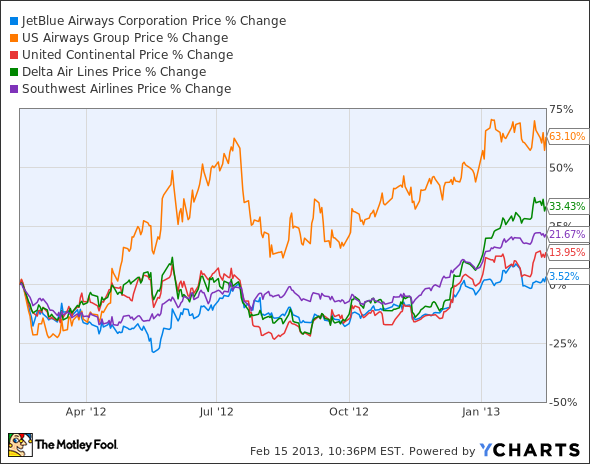 JetBlue will benefit from the AMR/ US Airways merger in two ways. Firstly, like all other airlines, JetBlue will benefit from increased pricing power resulting from industry consolidation. Additionally, JetBlue is poised to benefit from forced key gate divestitures by AMR. Over the past year, as shown by the chart above, JetBlue has lagged well behind its larger rivals. I would use this relative weakness to buy the, often overlooked, fifth largest U.S. airline, JetBlue ahead of potential benefits from the recently announced AMR/ US Airways merger.

The article What the Merger Means for the 5th Largest US Airline originally appeared on Fool.com and is written by Sammy Pollack.

Always Ask What Your Airline Can Do For You: Delta Air Lines, Inc. (DAL), Southwest...

How These Companies Will Bid Against US Airways Group Inc. (LCC): Delta Air...

The New American Airlines and How it Will Fit In: US Airways Group, Inc. (LCC...

Should Southwest Airlines Co. (LUV) Be the Next Warren Buffett Buy?