What Happens When you Can Shop in your Bathrobe? – Amazon.com, Inc. (AMZN), Wal-Mart Stores, Inc. (WMT)

Watching this video got me thinking that the retail business as we know it is over. Tesco wooed busy shoppers in South Korea by setting up virtual stores in subway stations. South Koreans can now do their grocery shopping while they are on their way to work. Tesco managed to address modern consumers’ needs, and make shopping an effortless experience for them, without spending time and money on building brick and mortar stores. Experiments like this wouldn’t have been possible 10 years ago — and they could have huge consequences for traditional retailers in the years ahead.

Amazon.com, Inc. (NASDAQ: AMZN) achieved astounding growth by taking advantage of the boom in internet shopping. Over the past decade, the firm enjoyed strong sales that placed it atop the list of the largest online retailers. It is the 41st most valuable U.S. company, and one of the biggest retailers based on revenue. However, all heroes have an Achilles heel.

Amazon’s net income for the last three quarters of 2012 failed to meet Wall Street’s expectations. This recent slip, though, came from overspending on growth plans, rather than low sales volumes. Amazon is well-positioned to benefit from the transformation trends in the retail business. The ability to conduct commerce electronically (e-commerce), as well as the use of mobile devices (m-commerce) and social media (s-commerce) for promoting online transactions are steadily changing the retail landscape.

According to the latest report by the Census Bureau of the U.S. Department of Commerce, total estimated U.S. e-commerce sales grew 17% year over year for the third quarter of 2012, while total retail sales rose by less than 4% for the period. Analysts’ estimates suggest that online shopping will be a game-changer in the U.S. retail business (see charts below) as buyers are increasingly changing their shopping habits. 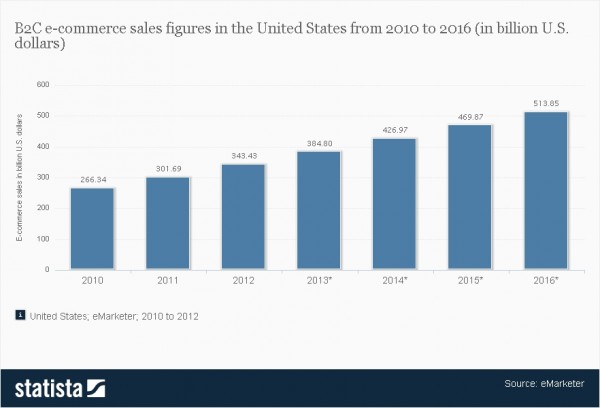 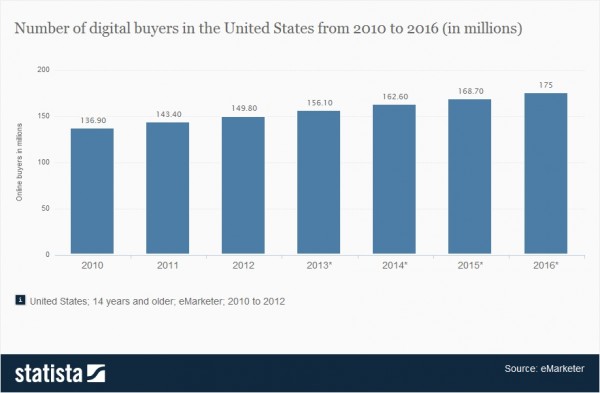 The emergence of smartphones and the explosive increase in shopping applications revolutionizes consumers’ point-of-sale decisions. Research firm Forrester predicts that consumer purchases via smartphones in the United States will grow from $10 billion in 2012 to $31 billion by the end of 2016. The firm anticipates the value of mobile retail transactions across Europe to elevenfold from €1.7 billion in 2011 to €19.2 billion in 2017. Given the fact that technology will play a key part in developing these trends, the Economist Intelligence Unit expects that, nine years from now, global online purchases will account for a far larger portion of overall retail sales than currently.

The need for adjustment

E-commerce’s continued rise can severely damage traditional retailers. Bookstore Borders and electronics chain Circuit City are two examples of retailers doomed by a combination of customers’ transitioning to online purchasing and increased competition in their respective fields. At the same time, the emergence of mobile commerce continues to embed showrooming — the phenomenon of examining products in a brick and mortar store, but buying online through rivals — into consumer shopping habits.

Several leading retailers have apparently decided, “If you can’t beat them, join them.” They’ve taken steps to embrace showrooming, and translate foot traffic into sales.

Wal-Mart Stores, Inc. (NYSE: WMT) understands that in order to remain at the forefront of the industry, it has to adjust to the transformation forces that shape the modern retail business. In a recent interview, Walmart.com President and CEO Joel Anderson stated: “You’ve got to go where the customer wants you to go. We live in the age of the customer.”

A major component of the firm’s strategy is “winning in e-commerce”. Wal-Mart is committed to delivering a multichannel experience in all of its core markets, including China, U.K., and Brazil. It added a Technology and eCommerce Committee, aiming to bring intensive company focus on global internet, social and mobile retailing. It has invested in new talent and technology and has launched a series of mobile applications trying to be a part of the showrooming trend, not fight against it.

Last year, Walmart increased its ownership stake in Yihaodian to approximately 51%. The leading Chinese e-commerce grocer made a significant market breakthrough by opening 1,000 3D virtual stores that integrate GPS technology and offer a unique customer experience. Wal-Mart is well-positioned to benefit from this strategic partnership.

The firm has been harshly hit by buyers’ preference for Amazon. A recent poll conducted by Harris Interactive presents Best Buy as the “biggest showroom victim,” with 71% of its showroomers being snapped up by Amazon. At the moment, all eyes are focused on the chain’s founder, Richard Schulze, who is expected to make a second buyout bid by the end of this month. Schulze aims to take the company private while implementing plans for revitalizing its operations.

Online shopping has traditionally been limited to products like books and consumer electronics. However, the success of firms like ASOS, is pointing to the immense growth opportunities for mainstream retailers. The online fashion giant managed to speed up its domestic and international sales growth and become a fashion powerhouse by allowing its customers to shop in their bathrobes.

The emergence of mobile commerce and the act of showrooming are steadily leading to the end of an era for conventional retailers. If you can shop your groceries while waiting in the subway, then visiting a store will be just a waste of time; and as we all know, “time is money.” The future of companies like Best Buy relies largely on their ability to cope with the transformation dynamics of the fast growing global “virtual marketplace”.

The article What Happens When you Can Shop in your Bathrobe? originally appeared on Fool.com and is written by Fani Kelesidou.

This “Coca-Cola Killer” is a Great Holiday Growth Stock to Own
Monthly Newsletter Strategy
Download a free copy of our newsletter and see the details inside!
Hedge Fund Resource Center
Billionaire Hedge Funds