When most investors think about China’s e-commerce market, they will probably think of Internet giant Alibaba Group (NASDAQOTH:ALBCF.PK), and for good reason – the Hong Kong-based company headed by Jack Ma is larger than Amazon.com, Inc. (NASDAQ:AMZN) and eBay Inc (NASDAQ:EBAY) combined. Alibaba’s Taobao controls 95% of the consumer-to-consumer (C2C) market, while Tmall controls 44% of the business-to-consumer (B2C) market. The dominance of these two sites has made it very tough for domestic and foreign companies to break into either industry. To date, Amazon holds less than a 1% share of the B2C market in China.

However, investors who are looking for an alternative to investing in Alibaba, which can be purchased on the pink sheets or on the Hong Kong stock exchange, can also consider two frequently overlooked names in Chinese e-commerce – Vipshop Holdings Ltd – ADR (NYSE:VIPS) and E Commerce China Dangdang Inc (ADR) (NYSE:DANG).

Vipshop Holdings Ltd – ADR (NYSE:VIPS) is a Guangzhou-based B2C discount retailer of various global brands, both foreign and domestic. Vipshop Holdings Ltd – ADR (NYSE:VIPS) is also one of the few vertically integrated Chinese B2C e-tailers to actually report a quarterly profit. Last quarter, the company reported earnings of $0.11 per ADR share, or $5.8 million, up from a loss of $0.33 per share, or $8.6 million last year. Revenue rose 207.6% year-on-year to $310.7 million. Gross margin rose from 21.2% to 23.4%. 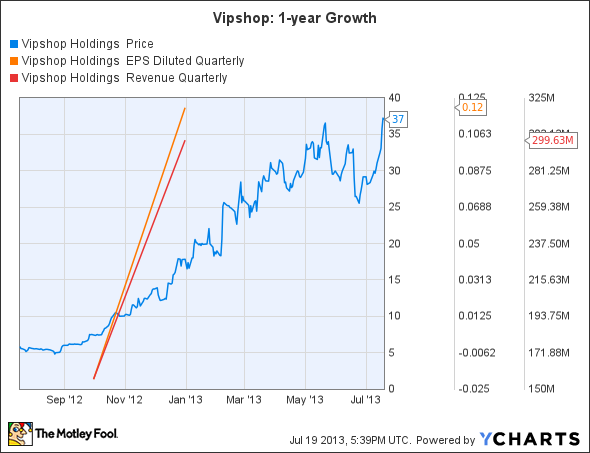 Vipshop Holdings Ltd – ADR (NYSE:VIPS)’s active customers rose from 1 million to 2.8 million. Even though that is a tiny sliver of the market compared to Tmall, which has 100 million registered users, it is still impressive growth for a company that is often ignored by its larger competitors. In May, Vipshop ranked ninth in total visits compared to its Chinese B2C competitors, but if its first quarter earnings were a clear indication of its current growth trajectory, that ranking could improve dramatically over the next few quarters. To stay competitive, Vipshop has been expanding partnership with foreign brands to attract more affluent customers, to increase sales volumes as well as the average revenue per transaction.

Investors haven’t been oblivious to Vipshop Holdings Ltd – ADR (NYSE:VIPS)’s growth potential. The stock has risen nearly 570% over the past twelve months, but it could be getting ahead of itself, since it now trades at 430 times trailing earnings. Yet its forward P/E of 22.8 and 5-year PEG ratio of 0.63 suggests that its price could be justified if it continues meeting earnings expectations.

However, investors should be aware that short sellers recently claimed that conflicting web traffic data from Alexa suggests that Vipshop Holdings Ltd – ADR (NYSE:VIPS) could be inflating its page visits and revenue growth, charges the company denies on grounds that many Chinese users do not have Alexa plugins installed in their browsers.

E Commerce China Dangdang Inc (ADR) (NYSE:DANG), more commonly known as Dangdang, is often considered to be the “Amazon of China”. Just like Amazon, Dangdang started out as an online bookstore, but it expanded its products to include digital devices, home appliances, household merchandise, music, clothing and cosmetics. Like Vipshop, E Commerce China Dangdang Inc (ADR) (NYSE:DANG) has a small but rapidly growing user base, adding 2.4 million active customers to reach 7.4 million at the end of the quarter.

Unlike Vipshop, however, E Commerce China Dangdang Inc (ADR) (NYSE:DANG) is still unprofitable, and reported a loss of $11.7 million quarter, a moderate improvement from the loss of $16.2 million a year earlier. Revenue, however, climbed 23% year-on-year to $214.7 million. Gross margin also rose from 14.2% to 17.2%. 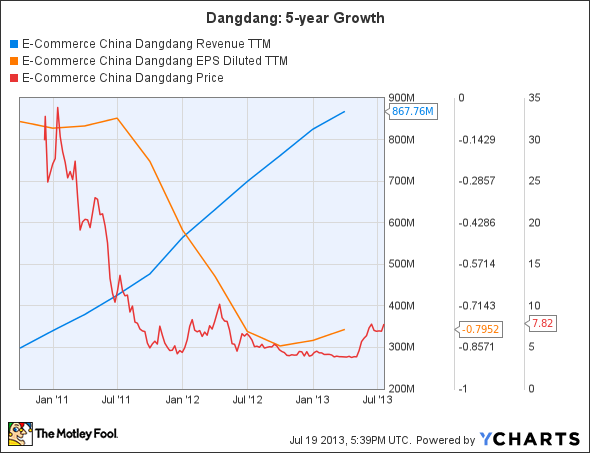 Books and media sales rose 24% year-on-year to $139.1 million, comprising 65% of the company’s top line. The company is notably selling an e-reader similar to Amazon’s Kindle for 699 RMB ($114), in an effort to increase e-book sales.