Whether you are an aggressive, shoot-for-the-moon investor or a conservative coupon clipper, you are constantly faced with an oft-debated investor’s dilemma. While in a perfect world, we would all love to buy companies at 52-week lows AND whose business execution is at an all-time high. However, in reality, it boils down to whether to invest in a company with a rising stock price and improving business outlook, or a falling stock amid near-term disappointment. Deep value investors tend to favor the cheap stock price and the rationalization that business fundamentals will improve. This works sometimes, but the stock universe is littered with companies that never came back: Best Buy, Eastman Kodak, Compaq Computers, and Research in Motion, to name a few. In fact, the evolution of business is such that death is the ultimate outcome – it’s just a matter of time.

I personally tend to favor companies that are seeing improved business execution, especially if I believe this can persist for the next several years, even if the stock price and valuation have moved notably higher. At some point, the valuation just runs too far and imbeds expectations that just can’t realistically be met. This is clearly the time to sell. However, this often comes well after the stock has been bashed by value investors or value publications such as Barron’s or Morningstar. Let’s take a look at some companies currently presenting investors with such a dilemma.

One of the best performing industries in the S&P 500 for the last year has been refiners. The S&P refining index has surged 31% in 2013 and returned 89% in the past year. This would normally scare off value-based investors who couldn’t stomach adding a position after such a strong move. But, the fundamentals are exceptionally strong now and likely for at least the next two years. Ever hear of the booming U.S. shale gas? Of course you have, but it isn’t just gas that’s booming. Oil production is surging in the midwestern United States as well. The chart below shows the rapid increase in U.S. oil production.

The result is a massive glut of oil in the Midwest that needs to be shipped to the coast for export delivery. Seems simple enough, expect that most of the infrastructure is designed to move oil from the coast to the Midwest. It takes several years to build up the necessary infrastructure to handle significant flow in the other direction. In the meantime, West Texas Intermediate oil trades at a notable discount to Brent and creates huge margins for refiners.

The name I continue to favor in the space is Marathon Petroleum Corp (NYSE:MPC). I highlighted the stock a year ago, ahead of the spin-off of MPLX. Barron’s made it one of their ten stocks for 2013 and has thus far been proven accurate. I favor the company for their balanced refining network. They have 7 refineries with capacity well balanced between the coast and Midwest, along with a balanced mix between sour and sweet crude. Plus, they still own a controlling interest in MPLX to go along with more than 1,400 Speedway convenience stores.

Valuation is very tame with a price-to-earnings ratio of just 10x and an EV/EBITDA under 5x. These screams value, but remember these are peak earnings in one of the most cyclical industries. Marathon Petroleum Corp (NYSE:MPC) was spun off from Marathon Oil in 2011, so there isn’t a long history, but the chart below depicts Valero Energy Corporation (NYSE:VLO)’s operating income over the last decade. 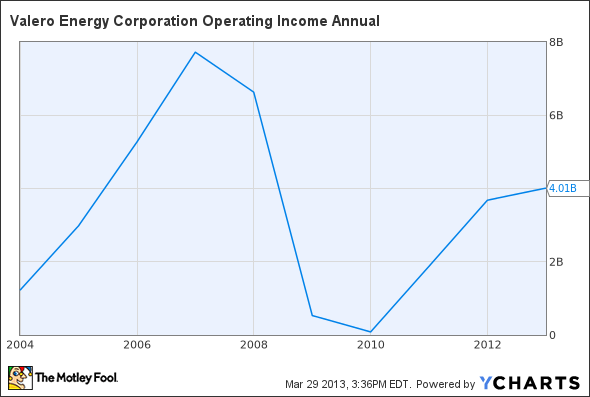 Valero has made a move this year, but still remains one of the weaker performing refining companies, despite several favorable attributes. First, the company is the largest independent refiner in North America with more than 15 refineries and favorable geographic and product mix. The table below shows the total return of refiners over the last 350 trading days, which marked the first trading day for Phillips 66 following its spin-off from Conoco Phillips. Valero Energy Corporation (NYSE:VLO) has underperformed and may well be positioned to close the gap in the coming quarters. Their bullish thesis stems from heavier reliance on coastal refineries and likely makes for the name to own for low-turnover accounts. The stock will likely underperform if there are substantial delays in getting infrastructure developed, as peers with more exposure to Mid-Continent cheap oil will see higher margins and earnings. But, eventually, Valero Energy Corporation (NYSE:VLO) sits ideally positioned to benefit as new pipelines and rail options bring Midwest oil into their complex refineries.