Crude prices have been hovering around the $100 mark for most of the year, which has made oil exploration a profitable affair (again). But hydrocarbon land reserves are depleting while inflationary pressures are adding up. This has made exploration of high margin oil fields almost a necessity.

This is one of the reasons why Seadrill Ltd (NYSE:SDRL) has been growing rapidly, despite having a debt ridden balance sheet.

On a quarterly basis, Seadrill Ltd (NYSE:SDRL) paid out $0.85 per share, which aggregated to a quarterly payout of $398 million ($0.85 per share * 469.18 million shares). But its quarterly operating cash flows stood at just $241 million. To meet the shortfall, the company had to raise cash from various sources.

Although its trailing 12 months (TTM) operating cash flow of $1.59 billion are enough to cover its TTM dividend payout of $1.57 billion, the bottom line remains that Seadrill Ltd (NYSE:SDRL) is over extending itself. The company also recently hiked its quarterly dividends to $0.88 per share (payable on June 20), but there is ample evidence that its cash flow situation could improve in the coming quarters.

From the chart attached below, it’s evident that Transocean LTD (NYSE:RIG) has been repaying its debt, while its peers have been accumulating liabilities. This is because Transocean LTD (NYSE:RIG) isn’t fully utilizing its resources, and is sitting on massive cash and cash equivalents of $3.68 billion. This has not only lowered its ROE, but also hampered its overall growth. Carl Icahn owns a 5.4% stake in the company, and he has been trying hard to shake-up things to revive growth. But he has been unsuccessful so far. 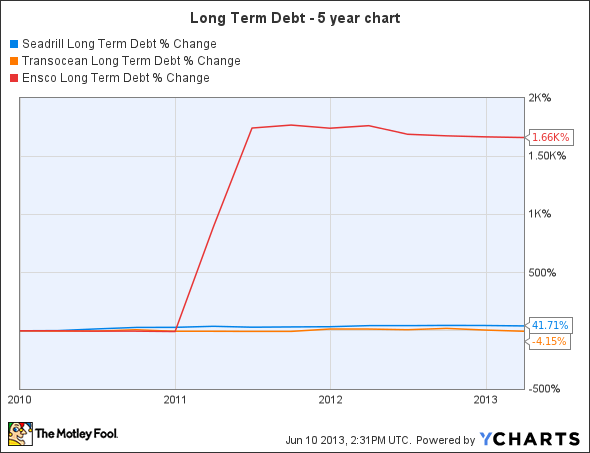 Meanwhile ENSCO PLC (NYSE:ESV)’s long-term debt has inflated faster than its peers. This is because of Ensco’s acquisition of Pride International for $7.3 billion, carried out in 2011. This may have inflated its long-term debt to $4.83 billion, but has also allowed the driller to enter Brazilian and West African markets. The financial benefits of the acquisition began showing up late last year, which is why its fiscal year 2012 EPS grew by an impressive 70%.

Similarly, Seadrill Ltd (NYSE:SDRL)’s high debt levels can be attributed to its recent acquisitions. The driller had acquired a 33.75% stake in Asia Offshore drilling for around $54 million, in November last year. This move would not only boost Seadrill’ operating cash flows, but allow the company to enter new Asian territories. Meanwhile Asia Offshore would use cash from the proceeds to order a new rig.

Recently, Seadrill also acquired an ultra-deep water semi-submersible rig for $590 million. Its overall utilization rate (quarterly) rose from 86% to 92% on a sequential basis, and a new addition to its fleet will be helpful in sharing the rising workload of its operating rigs.

Besides that, the company has also ordered four new jack-up rigs for around $920 million, which are expected to be delivered by 2015. It is estimated that each jack-up rig has the potential to generate $100 million in annual revenues, which will eventually add to Seadrill Ltd (NYSE:SDRL)’s operating cash flows.