Japanese equities could bring excellent returns to your portfolio, without involving too many risks. Tokyo is excited: it seems that the momentum investors have been waiting for the last 20 years has arrived. An unexpected yen depreciation that started when Prime Minister Shinzo Abe took power last year, in combination with the recovery of US demand, a possible delay of the consumption-tax hike initially planned for 2014, and steady progress in the Transpacific Partnership (TTP) talks, are causing market sentiment to improve. The results of this mix of macroeconomic factors can be seen in the outstanding performance of the Nikkei for the past 12 months: almost 60% up so far. But is there further room for growth?

In this article, I show why I’m still bullish on Japan, even after the amazing rally we saw in recent months. I also share what Japanese stocks I am watching nowadays. 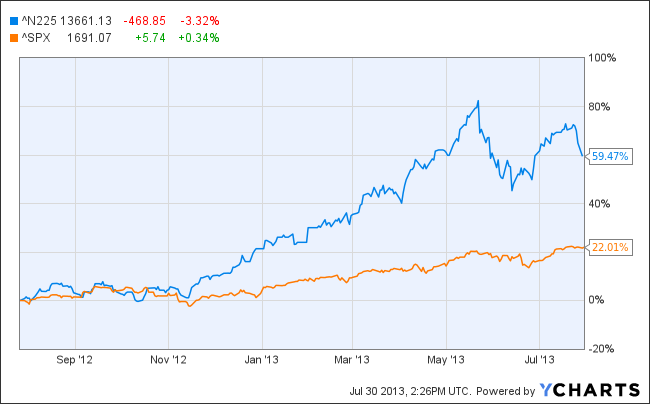 Why I’m still bullish on Japan

The most common bearish arguments are long-run facts and do not represent imminent risks.Debt, deflation, low fertility rates, aging economy…. I’ve heard it all and agree that some of these problems, which go far beyond macroeconomics, are extremely difficult to solve. Yet, with the exception of deflation, I don’t expect them to become negative short-run catalysts all of the sudden. Simply put, these issues are not going to explode any time soon.

Now that upper-house elections are over, Abe’s agenda will be reinforced. I expect Abe to deal with some well-known Japanese labor-market rigidities, which could boost market sentiment. In the long run, I expect more welfare benefits for young families. Policies like making it easy for women to come back to work after pregnancy and an increase in economic aid a family gets per child (currently 13,000 yen per kid) will at least stop fertility rates from going even lower and, in the long run, add sustainable vitality to the economy.

We already know how bad the Japanese market can get. Yet (most) Japanese companies remained profitable even in lean times – 2011 was a though year for Japan. And the 2008-2011 period was particularly tough for exporters, with the yen achieving record levels of appreciation. Yet, though times never last, but though people do. The Japanese companies that survived the earthquake, record yen strength levels and fierce competition from America and China are crisis-proof entities worth watching closely.

The jobless rate is falling (it fell 0.2 percentage points from the previous month to 3.9 percent, dropping below 4 percent for the first time in more than four years) and, even better, some early signs of long-awaited inflation can be seen (consumer price inflation rate rose to 0.2% in June from -0.3% in May).

Abenomics is not just about printing yen, buying assets and fiscal stimulus. Abenomics also involves increasing nominal wages and taking other actions to increase consumption, which is sustainable in the long run.

NourielRoubini, the excellent macroeconomist from NYU, predicts a 1.9% economic growth rate for this year. However, notice he remains somewhat bearish for 2014 and 2015.

There are more bullish signals which I will present in a next article. But for now, let me introduce three Japanese stocks that are totally worth analyzing:

This is a great pick. But there’s some risk involved. Tokyo Electric, also known as TEPCO, lost it all after the Tohoku 9.2-magnitude earthquake and Fukushima nuclear crisis: a 90%+ loss in value. Yet significant progress has been made since 2011. However, sentiment for this stock remains bearish.

In an amazing article, Marc Peckner has compared TEPCO with General Public Utilities Corporation (GPU) after the meltdown of Three Mile Island’s Unit 2 on 1979. GPU also lost it all, yet by 1987 its stock had recovered 50% of its pre-accident value, and it restarted paying dividends in 1988, reaching record energy production levels.

TEPCO could be a GPU in the making. It’s on its way back to profit zone, and if its request to restart operations in the Kashiwazaki-Kariwa plant is approved, TEPCO could see its cost base reduced substantially as it will rely less on expensive crude oil. This could bring positive EPS in less than one year.

So, in theory, with Kashiwazaki operational, a possible restart of Fukushima Daini nuclear plant by 2017 and most expenses related to the earthquake already incurred, there’s no fundamental reason impeding monopoly TEPCO, with its 44 million Japanese customers, from being profitable. Electricity is a must in the third-largest economy of the world.

Finally, keep in mind the Japanese government has a massive stake in TEPCO after injecting one trillion yen. If TEPCO goes back to the profit zone and continues its balance sheet improvements, the government could start selling its stake in the next three years, adding further demand and raising the price. 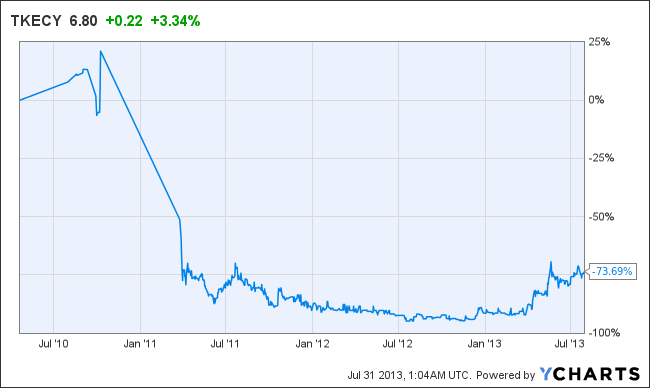 A carmaker that loves Abenomics

Toyota Motor Corporation (ADR) (NYSE:TM) is one of the companies that most benefits from a weak yen. The Toyota New Global Architecture (TNGA) may add more benefits, as by developing multiple vehicles simultaneously the company could significantly reduce its cost base.

The fact that Toyota Motor Corporation (ADR) (NYSE:TM) does not have to deal with high pension and health-care costs makes this stock a great complement to the Detroit Three. Also, a very small debt compared with the size of accumulated cash, makes Toyota Motor Corporation (ADR) (NYSE:TM) a safe stock and interesting complement to owning TEPCO: cash and cash equivalents surpass ¥2.7 trillion (about 16% of the current market capitalization). 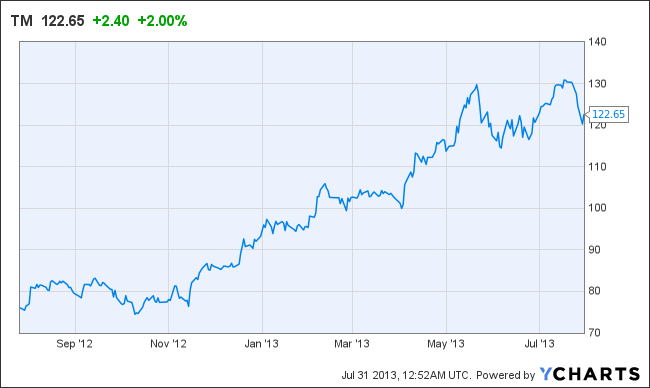 My final pick for today, once-glorious Panasonic, has a lot of greatness remaining.

Panasonic had a rough year and had to cut thousands of workers. At some point in November, its stock was worth only 376 yen, an 88% decrease from its 2000 price. But a weak yen combined with the restructuring effect are now causing meaningful financial and efficiency improvements. Add to this the fact that Panasonic is heavily addressing the green consumer, a promising market. In its second-quarter results, Panasonic announced that sales from its Eco Solutions division increased 6% from a year ago, due “to significant sales growth in solar business of Energy Systems BD”.

While there are still many challenges to long-term consistent growth in sales, Panasonic is still a strong brand in Japan and if its green transformation succeeds, international sales could recover and this could be a wonderful comeback. Definitely worth-watching. 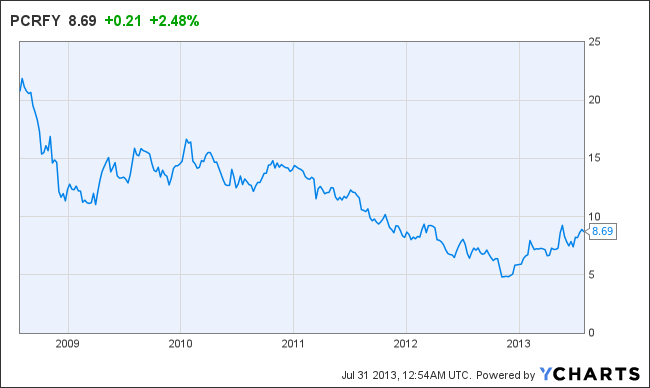 The article Why Japanese Stocks Will Go Even Higher originally appeared on Fool.com and is written by Adrian Campos.

Adrian Campos is long Tokyo Electric Power Company. The Motley Fool has no position in any of the stocks mentioned. Adrian is a member of The Motley Fool Blog Network — entries represent the personal opinion of the blogger and are not formally edited