A tamer Japanese currency and the last of the problems associated with the tsunami and earthquake crises in Asia have set Toyota Motor Corporation (ADR) (NYSE:TM) free from years of crisis management and into a new phase. The company reported record quarterly profit of $5.63 billion and raised its outlook for the year, benefiting from years of cost-cutting and a windfall from a weaker yen. Toyota Motor Corporation (ADR) (NYSE:TM) wants to make a jump and sell 10 million vehicles a year worldwide under its Toyota New Global Architecture approach to research and development of new models.

Nissan Motor saw a surge in demand for its all-electric Leaf in the month of July after the company cut prices for its all-electric Leaf car as it missed sales targets in the last two years. Further underlining the belief in all-electric is the company’s push to add quick charging at more than 100 U.S. Leaf certified dealerships. As the developed economy slows down, Nissan is focusing on the developing countries such as India, Russia, and Indonesia with the re-introduction of its Datsun brand. At the same time, Nissan’s upscale Infiniti unit is undergoing a revamp to lure wealthy Chinese buyers.

Honda Motor Co Ltd (ADR) (NYSE:HMC)’s net profit slipped 7% in Q2 2013, with U.S. sales growth and the benefits of a weaker yen offset by increased spending on a major expansion. Honda has set an aggressive goal to expand global annual sales to 6 million vehicles by March 2017 from the current 4 million, and is incurring expansion costs as it builds multiple new plants. The company is shifting its focus to emerging markets and on deploying a low-cost parts sourcing scheme. In the U.S., Honda Motor Co Ltd (ADR) (NYSE:HMC)’s sales experienced a 21% increase on a year-on-year basis, and beat its Japanese competitors Toyota Motor Corporation (ADR) (NYSE:TM) and Nissan.

Data from Morningstar and Financial Visualizations on August 3, 2013

The industry has an average P/E value of 14.5, which makes Toyota Motor Corporation (ADR) (NYSE:TM) and Honda Motor Co Ltd (ADR) (NYSE:HMC) overvalued. While being undervalued, Nissan’s net income growth over the past three years has been phenomenal as it outstrips the competition by miles. However, the PEG ratio provides a more accurate measure of the company’s valuation since growth is factored in as well and Honda’s PEG ratio suggests that it has the most favorable valuation of the three. 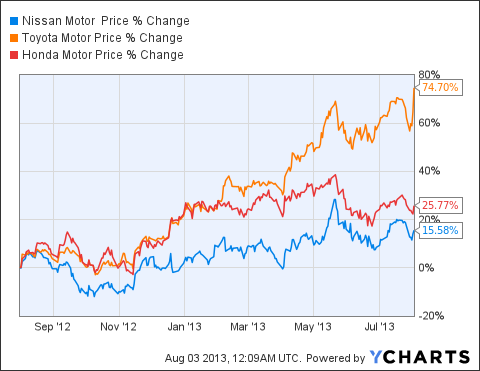 Honda Motor Co Ltd (ADR) (NYSE:HMC), Nissan, and Toyota Motor Corporation (ADR) (NYSE:TM) are widely renowned for their quality products. In case of Toyota, the company is already the world’s largest manufacturer of cars and is past its vehicle recall troubles. The company’s strong brand in emerging markets gives it a lead for sales there. Nissan and Honda Motor Co Ltd (ADR) (NYSE:HMC), on the other hand, are undoubtedly on the right track with their entrance and expansion into the developing markets, but they do not have the brand quality attached with Toyota. In case of Nissan, the company also does not have a flagship low-end car model which can rival Corolla or Civic.

For the remainder of 2013, Toyota is best suited to capitalize on the weaker yen and cost-reduction methodology. That being said, the stock does look over-priced by the measure of P/E, but the projected increase in sales due to competitively priced car models are expected to lower the company’s valuation going forward.

The article Strong Sales in July Call for a Look at Japanese Car Stocks originally appeared on Fool.com and is written by Awais Malik.

Awais is a member of The Motley Fool Blog Network — entries represent the personal opinion of the blogger and are not formally edited.