Legendary investor Warren Buffett analyzes companies by calculating return on invested capital, or ROIC, to help determine whether a company has an economic moat — the ability to earn returns on its investment above the cost of that investment. A higher ROIC implies that the company is using its capital more efficiently than others and creating value for its shareholders. 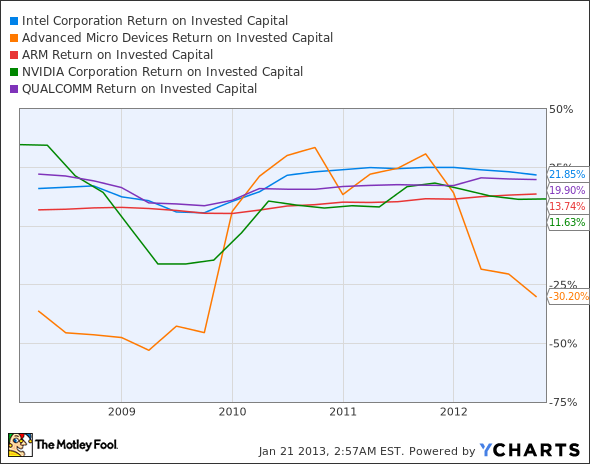 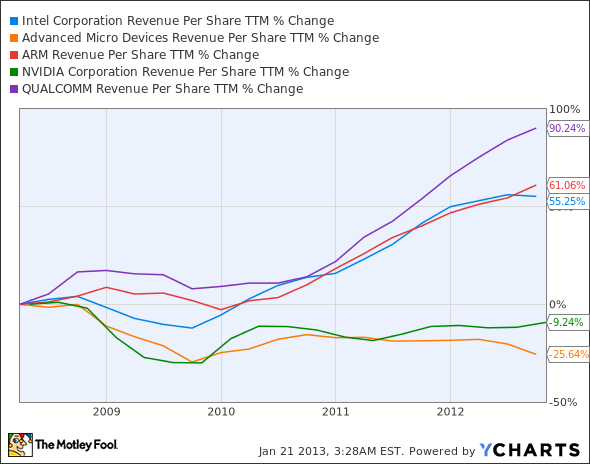 Intel’s revenue per share has been growing at an impressive rate of 55.25%, following Qualcomm’s 90.24% and ARM Holdings’ 61.06%. Given Intel’s bright prospect in mobile technology coupled with its strongest ROIC, I expect that Intel’s revenue per share growth will top the charts by 2015. Intel’s share buyback program will drive the growth even at a higher rate. This will eventually show up in expanding bottom-line and rising earnings per share.

Intel has fallen behind rivals Qualcomm and ARM Holdings in the mobile race. In the meantime, other chip makers such as NVIDIA and Texas Instruments registered smart recovery with the growing mobile devices market. Intel is trying to catch up in the mobile space with the release of some high-end cross platform compatible processors.

Intel is working jointly with Microsoft to combat Apple’s iPad in the $63.2 billion tablet market. Microsoft and Intel announced to unveil more than a dozen tablets. Although the joint venture is getting off to a slow start, it will certainly gather steam going forward. With maintaining its leadership position in traditional computing and emerging as a new player in mobile computing, Intel will certainly reward its long-term investors.

The article This Semiconductor Giant Is Coming Back originally appeared on Fool.com.