The Walt Disney Company (NYSE:DIS) may be a cash cow, but that doesn’t mean its growth has slowed. Excluding items that affect comparability, EPS for the company’s second quarter of 2013 increased 36% from the year-ago quarter. That is an impressive number for a company that has been publicly traded for more than five decades. But with shares nearly doubling the return of the S&P 500 in the trailing 12 months, it’s time to revisit its valuation.

In any valuation, it’s important to play the role of devil’s advocate, especially when you’re facing meaningful, double-digit growth rates. In that spirit, it’s useful to keep in mind that The Walt Disney Company (NYSE:DIS) is not immune to tough times. When consumers face tough times, so does Disney. 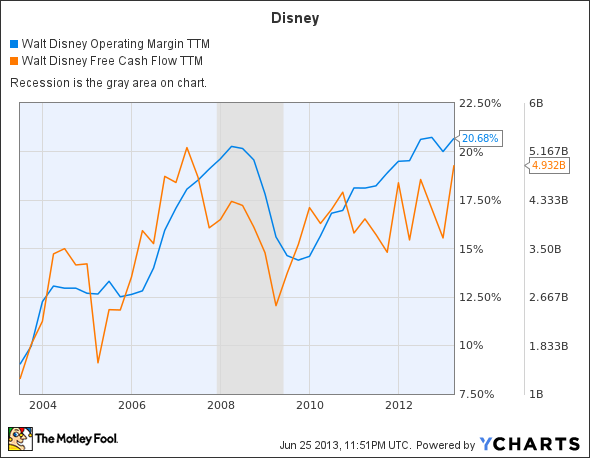 On the other hand, of course, this means that The Walt Disney Company (NYSE:DIS) benefits enormously when consumers begin to open up their wallets. During the recovery from the recession, Disney has improved both its operating margin and its free cash flow.

With this in mind, it’s reasonable to expect The Walt Disney Company (NYSE:DIS)’s growth rates in important metrics like EPS, free cash flow, and operating margin to decelerate in the future.

Let’s cut through the gibberish. Forget earnings. Forget revenue. We should be looking at free cash flow. Free cash flow is our best friend. It’s the cold, hard cash after all expenses are covered and capital expenditures are made. It’s the cash used to build shareholder value by paying out dividends and repurchasing shares or to stash away for future capital expenditures.

In fact, over the past 10 years, Disney has averaged a compound growth rate in free cash flow of just 10.3%.

Disney’s stock price isn’t reflective of a stock that’s grown free cash flow at just 10% per annum over the past five years. To understand the market’s enthusiasm about the stock, investors need to recognize the power of the company’s acquisitions.

And contrary to the doubtful attitudes investors often have toward Wall Street acquisitions, the market seems to nod in agreement with most of Disney’s major acquisitions. In 2006, Disney acquired Pixar Animation Studios for $7.4 billion. Then, in 2009, Disney acquired Marvel Entertainment for $4.24 billion. And in 2012, Disney snapped up Lucasfilm and the Star Wars franchise for $4.05 billion. Pixar and Marvel are already paying off handsomely for Disney, and the Lucasfilm acquisition will likely too. These acquisitions come with powerful intangible assets that will add value to Disney for years to come.

And then there is ESPN, which accounts for approximately 65% of Disney’s operating profit each year. The segment continues to hold dominant positions in both college and pro football — both central to the success of sports programming. Even better news, no formidable competitor to ESPN has yet made headways significant enough to worry Disney investors.

Given these growth drivers, it wouldn’t be fair to estimate future free cash flow growth in line with historical estimates. Massive spending on acquisitions that are arguably great investments has weighed on free cash flow. But in the future, they should pay off handsomely.