Apple Inc. (NASDAQ:AAPL), Delta Air Lines, Inc. (NYSE:DAL) and a couple other airliners are some of David Tepper’s biggest positions. How have they helped him to become one of the most successful hedge funds in today’s marketplace?

Billionaire David Tepper’s hedge fund, Appaloosa Management, reported in a letter to investors that it returned 16.8% in the first half of 2013, outperforming the S&P 500. This continues Tepper’s record of strong returns for his investors, with net annualized returns of 28% over the last 20 years. A major contributor to Appaloosa’s outperformance so far in 2013 has been one of investors’ most hated industries: legacy airlines. We track quarterly 13F filings from hundreds of hedge funds, including Appaloosa, as part of our work researching investment strategies; we have found, for example, that the most popular small cap stocks among hedge funds earn an average excess return of 18 percentage points per year (learn more about our small cap strategy) and our own portfolio based on these techniques has outperformed the S&P 500 by 33 percentage points in the last 11 months.

According to our database, three of Tepper’s ten largest holdings in his most recent 13F were legacy airlines. United Continental Holdings Inc (NYSE:UAL), his second largest 13F position, is up 44% year to date; US Airways Group Inc (NYSE:LCC) has risen 37%; and Delta Air Lines, Inc. (NYSE:DAL) has gained 78%. For purposes of comparison, the rest of Appaloosa’s top ten picks from its most recent 13F, which include Apple Inc. (NASDAQ:AAPL) and Citigroup Inc (NYSE:C), have returned 22% on average- still better than the S&P 500, but clearly the fund owes a good deal of its performance to the airlines. Check out the full list of Tepper’s stock picks. 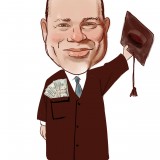 One of the reasons why airlines have done well year to date (and in 2012 as well- all three have at least doubled in price in the last two years) is the expectation that US Airways Group Inc (NYSE:LCC)’s merger with American Airlines will increase industry consolidation, and therefore the pricing power of the airlines against customers directly and against travel reservation services. Market sentiment had also been poor towards airlines, leaving them priced cheaply in terms of attainable earnings goals.

Even with legacy airlines appreciating considerably so far this year, they actually still generally carry low multiples in terms of their forward earnings estimates. US Airways Group Inc (NYSE:LCC) is valued at only 6 times consensus earnings for 2014. The company will take on some integration risk, of course, but that would have to be balanced against the fact that it has the highest upside from consolidation as it gains market share on many of the routes it currently shares with American. Its operating income increased by 19% last quarter compared to the second quarter of 2012, almost entirely due it success controlling costs. Billionaire George Soros’s hedge fund reported a position of 7.8 million shares at the beginning of April (find Soros’s favorite stocks).