With the market near all-time highs again, many investors are wondering, is it time to sell in May and go away?

My simple answer, dear investors, is that instead of selling all your stocks, you should “get big and get boring.” Find big, dependable blue-chip stocks with boring, necessary product lines to generate some dividend income over the slow summer months. For me, three stocks fit this bill: The Procter & Gamble Company (NYSE:PG), Kimberly Clark Corp (NYSE:KMB) and Colgate-Palmolive Company (NYSE:CL).

Get big and get boring

The Procter & Gamble Company (NYSE:PG), Kimberly Clark Corp (NYSE:KMB) and Colgate-Palmolive Company (NYSE:CL) produce some of the most well-known consumer brands in the world. Each company generates a lot of revenue from overseas markets and pays strong dividends. Let’s take a fundamental snapshot of these three consumer giants.

It’s easy to see that, based on fundamentals, The Procter & Gamble Company (NYSE:PG) is the cheapest of the bunch, while Colgate-Palmolive Company (NYSE:CL) has the strongest growth potential. A look at the top and bottom-line growth of these three companies over the past three years also reveals this trend. 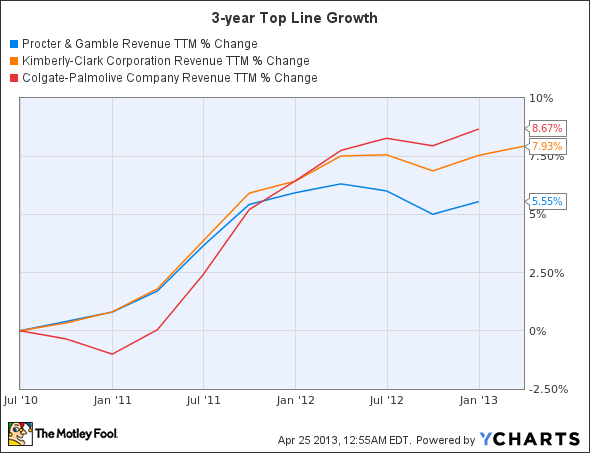 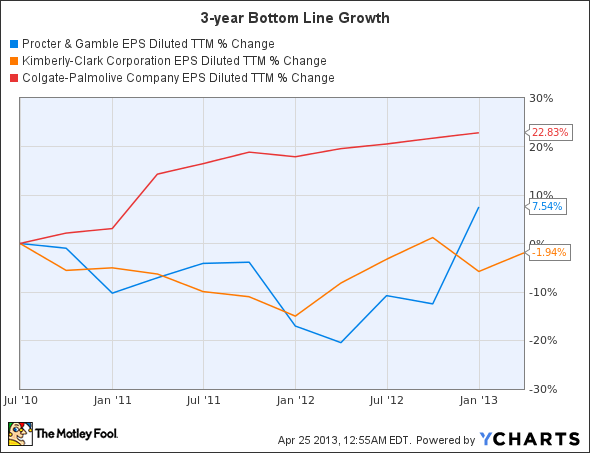 Let’s break down these three companies in detail and see which one is the best value.

Shares of The Procter & Gamble Company (NYSE:PG) plunged recently after the company reported its third quarter earnings. The company earned an adjusted $0.99 per share, up from $0.94 per share in the prior year quarter. Organic sales, which exclude currency impacts and acquisitions, rose 3%.

Both its top and bottom line growth exceeded analyst estimates, but bleak guidance spooked investors. P&G expects its full year earnings to miss the consensus estimate of $4.37 per share by up to $0.41.

P&G is well diversified internationally, with only 19% of its annual revenue coming from North America. Unfortunately, crisis-stricken Western Europe, generating 39% of its top line, is its most important market, while Latin America, which was hit by inflation and currency devaluation crises, comprises 10%. Asia makes up 18% of its sales, while the rest comes from other regions.

The Procter & Gamble Company (NYSE:PG)’s big problem is its lack of U.S. exposure. While it was a good idea to expand into a wide range of emerging markets prior to the financial crisis, the global economy has changed substantially. P&G now finds itself simultaneously exposed to China’s slowdown, Latin American inflation (especially Venezuela’s currency devaluation), and weakening spending power across Europe. Meanwhile, it doesn’t have enough exposure to North America’s stronger economy to offset those losses, despite the success of some new products, such as single-use Tide Pods. All P&G can do now is slash prices to hold onto market share in its international markets.

Kimberly Clark Corp (NYSE:KMB), on the other hand, is in better shape than The Procter & Gamble Company (NYSE:PG) thanks to its higher exposure to North America, which comprised 49% of its 2012 top line. It only generates 15% of its sales of Europe, and a combined 36% from Asia, Latin America and other markets. Kimberly Clark Corp (NYSE:KMB) produces high-margin household products such as Kleenex tissue, Cottonelle toilet paper and Huggies diapers.

Shares of Kimberly Clark Corp (NYSE:KMB) rallied after its recent first quarter earnings, after the company reported adjusted earnings of $1.48 per share, up from $1.24 per share a year earlier. Organic sales rose 3% due to strong sales in the same international markets that P&G has struggled. This was mainly due to strong demand for its two key products – tissues and diapers.