According to a French scientific abstract, women use make-up for two completely different reasons, camouflage or seduction. Whatever the reason, beauty is a multi-billion dollar business globally and investors should get in on the action. Markup on cosmetics and fragrances can range from 15% to several hundred percent.

There is barely an inch of a woman’s exterior body that some potion can’t “improve,” from the size of pores to hair thickeners that promise to add the look of 6500 hairs (since most women have over 100,000 hairs on their head this is not the big deal one would assume).

Even the brightest woman can rationally know cosmetics models are Photoshop beneficiaries yet still drop $100 on a cream that contains virtually the same chemical composition as any other on the market.

Another scientific study from the University of the Basque Country proved that most women use beauty products as an emotional panacea concluding, “Consumer satisfaction is greatest when the cosmetics brand helps to strengthen positive emotions through the perception of ‘caring for oneself’ and removing feelings of worry and guilt about not taking care of one’s appearance,” But the study’s author, Vanessa Apaolaza, added that first the cosmetic company has to convince them there is something to improve.

The three best known publicly-traded cosmetics companies are Elizabeth Arden, Inc. (NASDAQ:RDEN), The Est, and Revlon Inc (NYSE:REV) . Revlon Inc (NYSE:REV) was founded during the worst of The Great Depression in 1932.  The Est better known as Estee Lauder (NYSE:EL) was started in 1946 and Elizabeth Arden, Inc. (NASDAQ:RDEN) in 1910. But the newcomer to the pantheon of makeup products is one of the oldest names among US corporations, The Procter & Gamble Company (NYSE:PG), which owns Cover Girl and Max Factor (which they bought from Revlon Inc (NYSE:REV) in 1991) along with hair product line Pantene and grooming company Gillette.

Of these four names, Revlon Inc (NYSE:REV) and Elizabeth Arden, Inc. (NASDAQ:RDEN) are struggling the most. Revlon Inc (NYSE:REV), in particular has had a very rough road since the 1980’s when Estee Lauder gained ascendance in the department store counter war with its gifts with purchase and perceived higher end status. Since then Revlon was taken private by Ronald Perelman (currently Chairman of the Board and 76% stake holder) who divested many of its brands. He tried to take it public twice; the second time in 1996 it took.

Revlon Inc (NYSE:REV) reported a Q1 loss of $0.13 EPS on Apr. 25 and the stock sold off 12%. Some have posited it could be a takeover target by The Procter & Gamble Company (NYSE:PG) and the lone analyst who covers it gives a $25.00 price target. The stock is up over 25% over the last year and while some think the Q1 miss pushed it into oversold territory, the company has struggled with stronger rivals for several decades.

Elizabeth Arden, Inc. (NASDAQ:RDEN) has make-up lines but its strength now is fragrance with more celebrity fragrances (Nicki Minaj, Taylor Swift, Justin Bieber) than any other fragrance house. However, these are less associated with luxury and end up at tier two or three outlets, drugstores and the like. It carries designer names like Ed Hardy, True Religion, and Kate Spade. Overall, their fragrances skew much younger than Estee Lauder’s.

The company reported Q3 earnings of a $0.04 loss per share on May 2 compared to a profit of $0.07 in the year ago quarter. It did beat analysts’ expectations on revenue but still sold off 4% after reporting. Those teen celebrity lines actually did well as did its Juicy Couture line with fragrance sales up 22%.

Estee Lauder has climbed to an all-time high this year of $71.78 and while the trailing P/E is just as rich as Elizabeth Arden, Inc. (NASDAQ:RDEN)’s at 28.68 (the industry average is 28.69) it does have a 1.00% yield and it just reported very good numbers…again, with a 20% gain in EPS and beating expectations. It also guided higher and CEO Fabrizio Freda predicted accelerating revenue growth for Q4. Very pretty indeed.

The company has a number of popular makeup brands under its umbrella:Smashbox, MAC, Bobbi Brown, and Clinique and its own cosmetics and fragrances as well as licensing high end fragrances for Coach, Tory Burch, Michael Kors, and Tom Ford.

Analysts expect 13.95% growth and give a median price target of $77.00. Its advantage over the others is that it keeps its brand fresh with acquisitions and keeps it cachet by selling in Tier One department stores. Members of the founding Lauder family and a Lauder trust hold close to 4 million shares.

The Procter & Gamble Company (NYSE:PG) doesn’t sell pricey beauty products, but it is doing well with its beauty and grooming products which comprise two of  five divisions including health care, fabric and home care, and baby and family care. The company is best known as a Dividend Aristocrat and  pays a 3.10% yield at a 17.5 trailing P/E. It is the value name of these four.

The stock is already up 23.88% over the last year. Analysts expect high single-digit five-year growth of 7.75%. The company initiated a $10 billion cost savings program and a workforce reduction program in 2012. Even with savings on the bottom line it’s a stretch for growth above analyst expectations.

Caveats for The Procter & Gamble Company (NYSE:PG) are lowered Q4 guidance when it last reported causing the defensive stock to drop 6%. Despite progress in emerging markets the company still mentioned a rough macroeconomic environment ahead.

Women (and men) will continue to buy grooming products even in the worst of times. It’s not just to look good as much as to soothe the soul. The best of the companies that sell the sizzle are The Est for growth and The Procter & Gamble Company (NYSE:PG) for value. You’ll look good all the way to the bank. 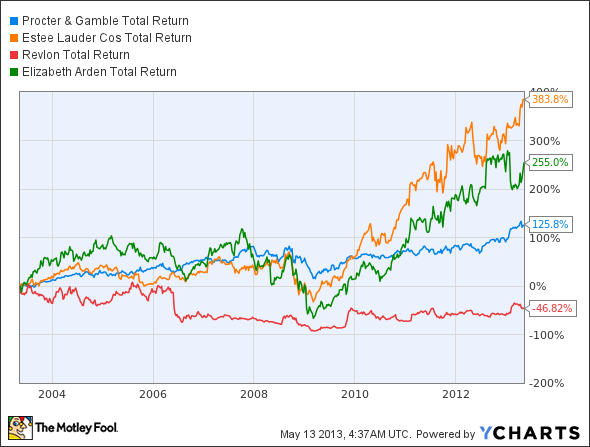 The article Selling the Sizzle and Sell the Fizzle originally appeared on Fool.com is written by AnnaLisa Kraft.