The Home Depot, Inc. (HD), Lowe’s Companies, Inc. (LOW): Why You Shouldn’t Give Up on Housing

It’s not often that a company beats estimates and raises guidance only for the stock to be promptly sold-off by investors. Clearly, in the case of The Home Depot, Inc. (NYSE:HD), the market is pricing in some future macroeconomic uncertainty.

The company’s recent earnings were excellent, and gave no cause for the sell-off. The most likely explanation is that investors are starting to fear the future impact of rising rates on the housing market. So is this a buying opportunity in the stock, or is the market right to be concerned?

In the second quarter, The Home Depot, Inc. (NYSE:HD) recorded its first double-digit sales increase in over 13 years, and raised full-year earnings and revenue guidance. Indeed, the latter event is becoming a pretty good benchmark for improving conditions within the US housing market. Clearly the US housing market is doing well this year, but recent rate rises and a fall in new home sales data for July has highlighted the potential dangers in housing. Conditions may well be fine now, but if this turns out to be the peak then buying into home-improvement stores could prove to be a mistake.

Moreover, the valuations on The Home Depot, Inc. (NYSE:HD) and Lowe’s Companies, Inc. (NYSE:LOW) suggest that both companies need an ongoing housing recovery in order to move higher from here. 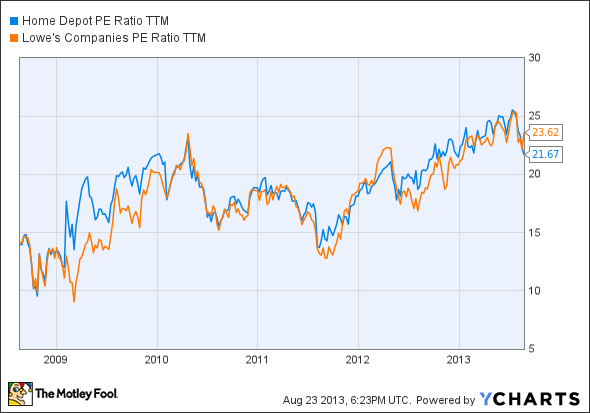 If you put these arguments together, it is easy to start beginning the case that The Home Depot, Inc. (NYSE:HD)’s prospects have peaked and the stock could fall from here.  Is it really that simple?

Why it’s not time to panic

There are four main reasons why investors shouldn’t give up just yet.

Firstly, while rising rates will affect housing affordability, according to historical data, buying a house via a mortgage is still affordable. For example, here is the NAHB and Wells Fargo & Co (NYSE:WFC) housing-opportunity index. It is an index that Wells Fargo & Co (NYSE:WFC) investors should follow closely, since the bank runs over 20% of the US mortgage market. The index may well have peaked, but continued job gains and increases in average household wealth will help to mitigate the effects of rising rates on the index.

Indeed, Wells Fargo & Co (NYSE:WFC) needs an improvement in new mortgage origination because higher rates are slowing refinancing activity. In response, the bank is taking measures to boost lending, but the ultimate guide to its fortunes will be how the housing market fares in future. This is a pretty good indication that the housing recovery has legs, because it implies that there isn’t an oversupply of properties on the market. The figures are nowhere near the kind of vacancy rates reached from 2006 through 2011.

The third reason is that the economy doesn’t just turn on a dime. The US economy is growing (albeit moderately), and investment in housing isn’t just a function of interest rates. In fact, rates tend to rise when the economy is getting better, and banks tend to start loosening credit standards when the economy improves. Moreover, job gains will add new potential home buyers to the marketplace; all of which are good for the housing market.

The market is right to fear some affect from interest rate rises, but the housing market has too much momentum behind it to fall away anytime soon. Investors in The Home Depot, Inc. (NYSE:HD) and Lowe’s Companies, Inc. (NYSE:LOW) should look forward to ongoing improvements in end- market demand.

While Home-Depot is more of a pure-play on housing, Lowe’s Companies, Inc. (NYSE:LOW) also has upside from its internal restructuring. The latter is trying to reset its sales lines with a view to increasing inventory turnover. Lowe’s is executing well on its plans, but its usually easier to do such things when end-markets remain favorable. In other words, both companies are still likely to see their prospects dictated by the housing market.

With the market seemingly determined (in the short term) to price in some future weakness in The Home Depot, Inc. (NYSE:HD), it looks like a good opportunity to pick up some stock.

The article Why You Shouldn’t Give Up on Housing originally appeared on Fool.com.