The Goodyear Tire & Rubber Company (GT): Are Hedge Funds Right About This Stock?

We at Insider Monkey have gone over 700 13F filings that hedge funds and prominent investors are required to file by the SEC. The 13F filings show the funds’ and investors’ portfolio positions as of September 30th. In this article, we look at what those investors think of The Goodyear Tire & Rubber Company (NASDAQ:GT).

The Goodyear Tire & Rubber Company was in 25 hedge funds’ portfolios at the end of the third quarter of 2018. GT investors should pay attention to an increase in support from the world’s most elite money managers lately. There were 22 hedge funds in our database with GT positions at the end of the previous quarter. Our calculations also showed that GT isn’t among the 30 most popular stocks among hedge funds. We have covered the company extensively in the past.

If you’d ask most market participants, hedge funds are seen as worthless, outdated investment vehicles of yesteryear. While there are greater than 8000 funds in operation at the moment, Our researchers choose to focus on the upper echelon of this club, approximately 700 funds. These money managers manage the majority of the smart money’s total capital, and by monitoring their highest performing equity investments, Insider Monkey has found various investment strategies that have historically outstripped the market. Insider Monkey’s flagship hedge fund strategy outrun the S&P 500 index by 6 percentage points a year since its inception in May 2014 through early November 2018. We were able to generate large returns even by identifying short candidates. Our portfolio of short stocks lost 24% since February 2017 (through December 3rd) even though the market was up nearly 23% during the same period. We just shared a list of 11 short targets in our latest quarterly update.

Credit rating agency recently revised Goodyear’s rating outlook to negative, citing raw material costs that are expected to remain elevated over the near term. Moody’s believes relatively flat global demand for aftermarket tires over the next year and cost pressure will impact Goodyear’s ability to de-lever its balance sheet.

Our readers will be interested to know that director Michael J. Morell was responsible for the largest insider purchase of the company’s common stock. He purchased 875 shares at $27.99 apiece, and with shares trading at $21.71, the move has not paid dividends as of yet.

What does the smart money think about The Goodyear Tire & Rubber Company (NASDAQ:GT)?

Heading into the fourth quarter of 2018, a total of 25 of the hedge funds tracked by Insider Monkey held long positions in this stock, a change of 14% from the previous quarter. By comparison, 24 hedge funds held shares or bullish call options in GT heading into this year. With hedge funds’ sentiment swirling, there exists an “upper tier” of key hedge fund managers who were adding to their holdings considerably (or already accumulated large positions). 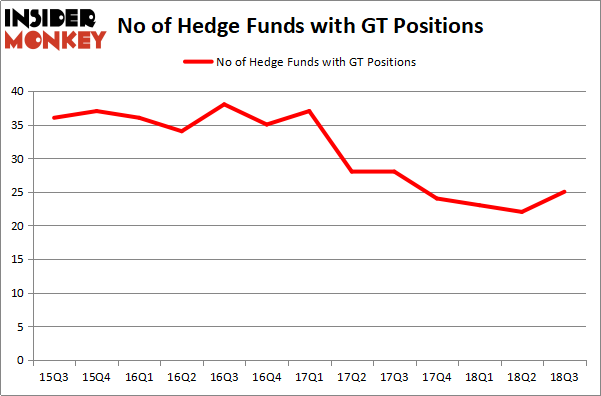 The largest stake in The Goodyear Tire & Rubber Company (NASDAQ:GT) was held by Adage Capital Management, which reported holding $229.4 million worth of stock at the end of September. It was followed by Diamond Hill Capital with a $176.3 million position. Other investors bullish on the company included Levin Capital Strategies, D E Shaw, and AQR Capital Management.

As aggregate interest increased, some big names were breaking ground themselves. Alyeska Investment Group, managed by Anand Parekh, assembled the biggest position in The Goodyear Tire & Rubber Company (NASDAQ:GT). Alyeska Investment Group had $11.4 million invested in the company at the end of the quarter. Ilya Boroditsky’s Precision Path Capital also initiated an $8 million position during the quarter. The other funds with new positions in the stock are Steve Cohen’s Point72 Asset Management, Mike Vranos’ Ellington, and Deepak Gulati’s Argentiere Capital.

As you can see these stocks had an average of 12.25 hedge funds with bullish positions and the average amount invested in these stocks was $108 million. That figure was $654 million in GT’s case. Sonoco Products Company (NYSE:SON) is the most popular stock in this table. On the other hand Semiconductor Manufacturing Int’l (NYSE:SMI) is the least popular one with only 5 bullish hedge fund positions. Compared to these stocks The Goodyear Tire & Rubber Company (NASDAQ:GT) is more popular among hedge funds. Considering that hedge funds are fond of this stock in relation to its market cap peers, it may be a good idea to analyze it in detail and potentially include it in your portfolio.