The Death of Dell Inc. (DELL)

Two weeks ago, PC giant Dell Inc. (NASDAQ:DELL) told investors that it would be taken private in a $22.4 billion leveraged buyout, handing control of the company over to CEO Michael Dell and private investment firm Silver Lake. For most investors, that was the end of Dell, which makes its recently released fourth-quarter earnings — which are bleaker than ever — read like an obituary.

While its fourth-quarter numbers are fairly irrelevant for Dell shareholders, its results shed light on the future of the crumbling U.S. Wintel PC empire, which has been steadily gobbled up by Apple Inc. (NASDAQ:AAPL) and a slew of Asian competitors such as Lenovo, Asus and Acer.

Revenue slid 11% from the prior year quarter to $14.3 billion, also topping the analyst forecast of $14.1 billion.

Although Dell beat forecasts on both the top and bottom lines, no one rejoiced — the bar had been set so low that the company could have simply tripped over it. The company also canceled Michael Dell’s scheduled participation in the fourth-quarter conference call with analysts, which makes the earnings release even more irrelevant.

For some newer Dell investors, Michael Dell’s buyout offer of $13.65 per share — a 25% acquisition premium to its closing price on Jan. 11 — seems fair and justified. For longer-term investors, however, the offer is a pittance for a company that was once worth $100 billion and the largest PC manufacturer in the world.

Dell’s board of directors is in a hurry to close the books on the deal, unanimously approving the deal and stating that it was not considering any competing offers. The vote is still pending a shareholder vote, but the board is confident that the deal will close before the end of its second fiscal quarter.

However, the road is not all clear for a leverage buyout yet. Southeastern Asset Management and T. Rowe Price Group, Inc. (NASDAQ:TROW), two of Dell’s largest shareholders, have publicly stated that they will vote against the buyout unless they receive a higher buyout offer. Other institutional and retail investors have voiced support for the two companies, which has increased the likelihood of a higher offer.

In lieu of a tombstone, let’s erect a tablet

Dell’s heyday was in the late 1990s, when demand for PCs skyrocketed as Internet penetration increased. Although the dot-com crash brought Dell back down from its all-time high of $56 per share, the company recovered steadily throughout the following decade — until Apple woke up.

This series of events turned the entire PC market on its head, and business models that Dell and Hewlett-Packard Company (NYSE:HPQ) had grown accustomed to were no longer working. 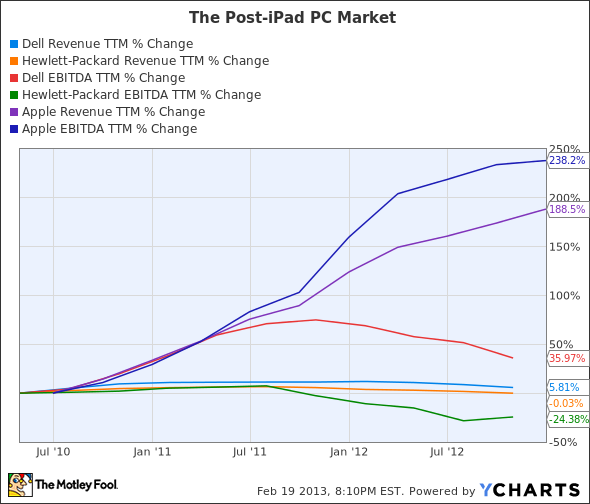 Dell and HP simply couldn’t respond quickly enough to the rise of tablet computers, and with good reason — 45% to 50% of Dell’s annual revenue is generated from desktop and notebook PC sales. It wasn’t a business model that could be changed overnight.