The Coca-Cola Company (KO), PepsiCo, Inc. (PEP): Should You Be Worried?

I recently purchased a gadget/invention called a Sodastream International Ltd (NASDAQ:SODA), created by a company with the same name. The process is relatively simple: I fill up the included bottle with cold water, push a button that carbonates it, and add in a small amount of syrup that turns the water into a cola tasting drink.

The drink doesn’t taste the same as a The Coca-Cola Company (NYSE:KO) or PepsiCo, Inc. (NYSE:PEP) bottled or fountain drink. It tastes better.

There is now an actual contender to the two major players in the soft drink industry. SodaStream delivers stupendously with this invention, and with more flavors including lemon-lime (comparable to Sprite and Sierra Mist), and an energy syrup (comparable to Red Bull), nothing can stop Sodastream International Ltd (NASDAQ:SODA) from penetrating a once impenetrable market.

Of course, the The Coca-Cola Company (NYSE:KO) and PepsiCo, Inc. (NYSE:PEP) brand will always have their stellar reputations that will continue to allow them to sell soft drinks around the world, but with the rise of SodaStream’s new innovation, the two majors should be worried.

One bottle of the cola syrup from SodaStream costs $4.99. That same bottle can make up to 33 12-oz cans of The Coca-Cola Company (NYSE:KO) and PepsiCo. If you can do the math, that’s about $0.15 per can of Coca-Cola and PepsiCo, Inc. (NYSE:PEP), compared to the average $1-$1.50 for the same taste but tagged with a top brand.

Not only is SodaStream’s syrup more nutritious, but it costs 85% less than a normal can of The Coca-Cola Company (NYSE:KO) or PepsiCo, Inc. (NYSE:PEP), all while tasting the same (if not better) than the original. 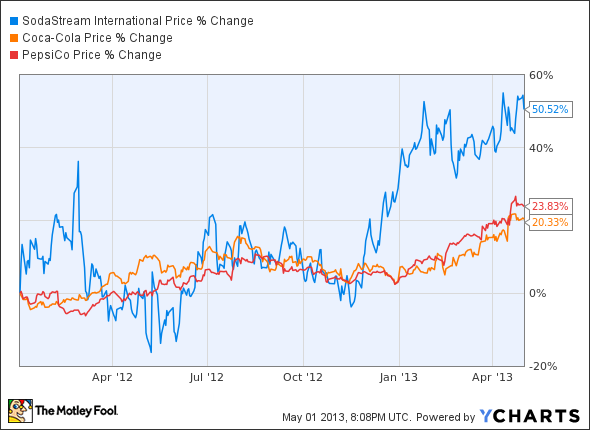 Since the beginning of 2012, SodaStream’s stock has increased about 50%. Its top and bottom lines have also increased 40% and 48%, respectively, in the last year. With SodaStream just starting to make their way into the United States, the growth potential is just starting out.

SodaStream’s stock is currently trading around $50, with an EPS of $2.09. Analysts project this company to grow about 30% over the next five years. Now, that may change between now and 2018, but historically, it has been growing at that rate (mostly faster).

Giving SodaStream’s EPS, a growth rate of the projected 30% (and subsequently multiplying it by the historical average PE of 29), SodaStream’s stock price in five years should be around $225. Buying the stock today would represent an overall return of 350%.