The Coca-Cola Company (KO), AT&T Inc. (T): How To Invest Despite Long-Tail Risk, Part I

Investors have been shifting out of investments that protect against rare, but catastrophic risks. With the market near all time highs, those risks are still very real. Investing in low beta stocks like The Coca-Cola Company (NYSE:KO), PepsiCo, Inc. (NYSE:PEP), AT&T Inc. (NYSE:T), and Verizon Communications Inc. (NYSE:VZ) can help protect against some of that downside.

Reuters recently published an article highlighting that hedge funds designed to protect investors from large, unexpected losses are seeing money flow out their doors. While these black swan funds were popular after the 2007 to 2009 recession and associated market crash, it seems Wall Street’s collective short memory is leading investors to jump back into the market with abandon.

However, some market watchers, including mutual fund manager John Hussman, continue to warn that markets are overstretched. Hussman’s data driven analysis recently led him to pen: “…stocks are not cheap, but are instead strenuously overvalued. The speculative reach for yield, encouraged by the Federal Reserve, has created another bubble – which is not recognized as a bubble only because distorted profit margins create the illusion that stocks are reasonably valued.”

There’s no way to avoid steep market drops except to be out of the market. Only, income investors can’t live off of their dividends if they aren’t invested. One way to soften the blow is to focus on low beta dividend payers. Beta is a measure of sensitivity to the broader market. A beta of one suggests that a stock will move in lockstep, up and down, with the overall market.

A beta below one means that a stock is likely to move less than the market. Here are four large companies with betas below 0.5: 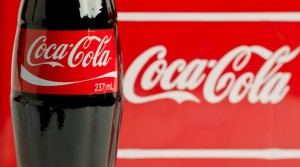 The Coca-Cola Company (NYSE:KO) and PepsiCo, Inc. (NYSE:PEP) are the dynamic duo of the soda industry. Coke’s yield is around 2.8% while Pepsi’s is just a shade lower. Although neither yield is impressively high, both companies have long and storied histories of annual dividend increases. Add in great franchises and frequently purchased products and you can see why both were able to weather the recession in stride.

Coke is highly focused on its beverages. However, Coke is easily the number one cola brand in the world. It has a moderate level of debt and a reasonable payout ratio. The Coca-Cola Company (NYSE:KO) boasts operations in more than 200 countries, some 3,500 products, and a massive distribution network. There’s a reason why Coke is the soda industry’s leader.

PepsiCo, Inc. (NYSE:PEP) is the number two player in the beverage space, but is number one in snacks. For investors seeking out a more diversified business, Pepsi is the better option. Not only is Pepsi a leader in snacks, via its Frito-Lay division, but it also has a large food business that it acquired when it bought Quaker Oats. So, in reality, it has three different avenues of growth. It’s more heavily indebted than The Coca-Cola Company (NYSE:KO) and has a similar payout ratio. That said, the small frequently purchased items Pepsi sells should easily support the more material debt load.

Both companies are set to benefit as emerging economies industrialize. While soda consumption in mature markets is fairly stable, lesser developed countries have plenty of room for increased consumption. More servings means more money flowing down to the bottom line. PepsiCo, Inc. (NYSE:PEP)’s snacks and foods will also benefit from this trend.

Both are solid companies with slow but relatively predictable growth ahead of them. Investors would do well to consider either, or both.