The Best Stock to Profit from Cheap Natural Gas

With new technologies like hydraulic fracturing and horizontal drilling unlocking natural gas from shale basins that were previously inaccessible, gas prices have plummeted in the past few years. Since 2008, the price of gas has fallen from a high above $13 per thousand cubic feet (Mcf) to today’s price of $3.50 … a 73% decline in a little more than four years.

That sell-off has been a thorn in the side of energy companies.

Aside from the effect on day-to-day profits, many companies have also been forced to make downward adjustments on the balance sheet. Earlier this year, BHP Billiton Limited (NYSE:BHP) took a $2.8 billionimpairment charge for gas assets in the Fayetteville Shale… BP plc (NYSE:BP) had to write off $2.11 billion… and the largest gas producer in Canada — EnCana Corporation (TSE:ECA) — had to write down $1.7 billion.

But I’ve found one energy company that is prospering, despite low natural gas prices. In fact, this company has navigated the difficult pricing environment so well that despite gas prices trading at a third of where they were back in 2007… its stock price is actually up 81% in the past five years. 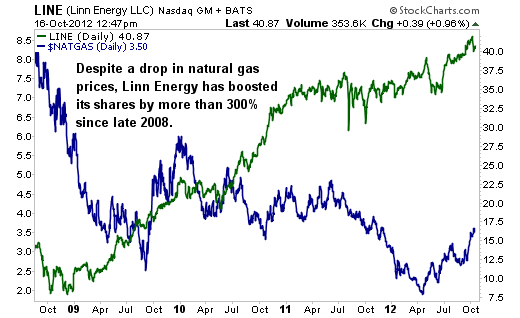 What’s behind this company’s success? In short, it’s the company’s hedging strategy…

For those of you who are unfamiliar, a hedge is a lot like taking out an insurance policy on your home… You hope to never have to use it, but just in case something goes wrong, you’re still able to protect your bigger investment.

Much like homeowners insurance, hedge contracts are essentially financial tools that enable you to pay a little to preserve a lot.

For example, an oil company might enter into contracts to sell 50% of its oil at $100 per barrel. If oil drops to $90, $80, or even lower, then the company is still guaranteed at least $100 a barrel on half of its oil production.

Sometimes, a small hedge can minimize the damage or completely save a much larger bet that goes sour. That’s why energy producers use them to safeguard against a drop in either crude or natural gas prices.

One company that has been actively taking advantage of hedges lately is Linn Energy, LLC (NASDAQ:LINE). Thanks to hedging, Linn is able to sell 100% of its natural gas for significantly more than the current market rate.

Linn Energy is a rare breed. The company is one of less than a dozen upstream master limited partnerships (MLPs). It owns roughly 15,000 active oil and gas wells from the Permian Basin of west Texas to the Bakken Shale of North Dakota.

But Linn Energy isn’t like most oil and gas companies… It doesn’t dispatch exploration teams to remote areas such as the South China Sea in search of new discoveries, nor does it pay billions to develop them.

It lets traditional oil companies do the heavy lifting. Once those properties are mature and gushing, then Linn comes forward with an acquisition offer (giving the seller fresh cash to repeat the process somewhere else).

Because it doesn’t have to shell out money to explore and develop new land, Linn has plenty of cash on hand for acquisitions — and this empire builder is an avid shopper. In total, Linn has invested $5.6 billion during the past few years to close 29 acquisitions.

The acquisition of BP’s assets in the Hugoton Basin of Kansas is a perfect example. Back in March, Linn paid $1.2 billion for 2,400 wells that are producing 110 million cubic feet of gas and liquids per day.

Now, anyone who has been paying attention to the gas market might be puzzled why Linn would be interested in this real estate when natural gas prices are languishing near historic lows.

Well, consider this: the firm immediately used hedges to lock in Hugoton’s output at $4 per Mcf, and it now only costs roughly $2 per Mcf in “lifting costs” to get this gas out of the ground.

This leaves a healthy profit margin of $2 — and this is the worst-case scenario.

If gas is stuck in neutral for the next few years, or even if it falls further, then Linn will pocket no less than $4 per Mcf. So there is no downside commodity exposure.

Linn’s hedging strategy effectively converts every last drop of oil and gas into predictable cash almost immediately. That has allowed it to raise its dividend an incredible 81% in the past six years.

The company’s natural gas production is 100% sheltered clear through 2017. Meanwhile, its crude oil output is 100% hedged at prices north of $90 per barrel through 2016.

By contrast, the average exploration and production company has hedged 44% of production in 2012, 22% in 2013, and just 4% in 2014. As a result, if gas prices stay low, then Linn will be one of the industry’s most profitable players.

Risks to Consider: Of course with investing, nothing is 100% certain. Linn’s hedges work best in a flat or declining price environment. If gas rebounds too far, too fast, then the company will leave some money on the table.

Action to Take –> But thanks to Linn, investors don’t have to wait for oil and gas prices to turn around. This unique business is already capturing above market rates today, with almost none of the downside commodity price risk that other firms face.

This article was originally written by Nathan Slaughter, and posted on StreetAuthority.

5 Commodity Dividend Stocks To Stay Away From

Stocks to Buy For Hyperinflation

Is BP a Good Stock to Buy?

Is Chevron a Good Stock to Buy?