Tesla Motors Inc (NASDAQ:TSLA) is an incredibly exciting company, there’s no doubting it. Over the last three months this stock has been up, down and back up again, resulting in a gain of close to 25% for investors. 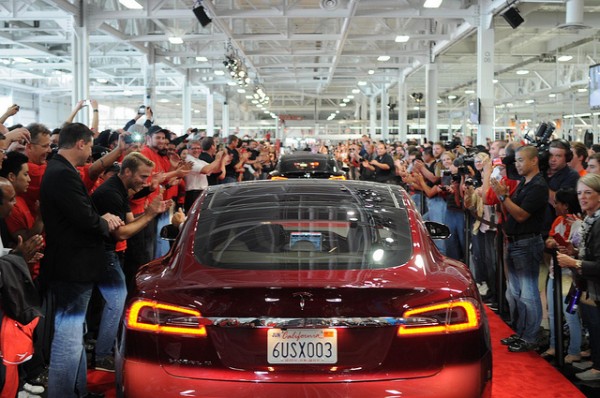 There’s no doubting that Tesla Motors Inc (NASDAQ:TSLA) has provided some great gains over the last couple of months. Question is though, what’s better from here on out, Tesla or the industry stalwarts in Ford Motor Company (NYSE:F) and General Motors Company (NYSE:GM).

The Case for Tesla

Tesla Motors Inc (NASDAQ:TSLA) was not the first electric car company to the market, but it is the most recognized, and the best at doing what it does.

The vehicles that Tesla produces will, at least in my own opinion, become more prominent in the market as gas prices rise. The current average on the west coast is close to, if not over, $4 per gallon according to AAA.

If gas begins edging closer to that $5 mark, we may see more consumers jumping to Tesla for their electric vehicles. Just check out this study from Deloitte (PDF) where the company found out that 78% of Americans would consider electric if gas hit $5.

Two other points that Tesla Motors Inc (NASDAQ:TSLA) can claim are the increasing number of charging stations around the United States, and the more efficient lithium ion batteries that are coming to market.

When it comes to charging stations, there are approximately 5,612 publicly accessible stations across the United States. Some of these stations can provide up to 80 miles of charge in just 20 minutes. If you take a look at this Department of Energy chart, you’ll see that electric charging stations have been really taking off. Better access to these stations will bring about more sales.

Now that we know what Tesla Motors Inc (NASDAQ:TSLA) could bring to the table, how about the titans? Ford Motor Company (NYSE:F) was founded 109 years ago and has been making cars since then. They’ve also been making their own leaps into the electric vehicle game as of late with the C-Max, and fully electric Focus.

Like Tesla, Ford has improving sales. The company managed to grow sales to a total of236,160 (PDF) units in the month of March, the company’s best month since May 2007.

Ford Motor Company (NYSE:F) also pays a dividend. That dividend yields 3.13% at the time of writing, one of the better yielders in the S&P 500.

With a P/E of 9, this company is at a price ratio that is well below the industry average of 14.2.

General Motors Company (NYSE:GM) was founded in 1908. Since 1908 this company has been through some turbulent times that even resulted in bankruptcy in 2009.

After putting themselves back on the stock exchange in 2010, this company has been trying to reprove its prominence, and I believe it is doing quite a good job at doing so.

Throughout the month of March, GM managed to sell some 245,000+ vehicles. That’s a 6.4% gain year over year with Cadillac contributing the biggest numbers growth for the company.

One great advantage that GM has over Ford is that they have a lot less debt. Declaring bankruptcy in 2009 was actually one of the best things this company could do.

Still though, there is debt on the balance sheet. With that debt, GM paid $133 million in interest last year. Compare that to Ford who paid some $869 million; it’s just crazy to think of.

The only real thing that these three companies have in common is that they produce and sell vehicles around the world. They begin to differ in how they get the job done.

Tesla Motors Inc (NASDAQ:TSLA) obviously has its focus entirely on electric, which for me is a bet on the future. Ford and GM were a little slower to the game, but they’re both getting in there with electric based vehicles of their own.

For me, the best company of the bunch is General Motors Company (NYSE:GM). They have some incredible brands, growing sales, and a lot less debt than Ford. If you don’t mind the debt, Ford is a buy too.

Finally, Tesla Motors for me is a buy, just not at current levels. The stock has been shaky over the last few months, and I think that’s going to continue. Just wait for a pullback before getting in on this company. Once you’re in, it’s a long term holder.