Another stock that short sellers are targeting right now is Cliffs Natural Resources Inc (NYSE:CLF), which has a short interest that represented almost 25% of the stock’s free float. Although the stock has had a horrid past few months, it is up more than 20% since hitting a low of $17.32 in late April thanks to short covering after its Q1 earnings release.

However, I don’t expect the short squeeze to continue in this stock. The bear thesis on the iron ore producer relates to the slowdown the global economy, especially China. In 2012, Cliffs’ revenue from China was $2 billion, which accounted for more than 34% of the company’s overall revenue. The Chinese economy grew 7.7% year-on-year in the first quarter of the year, down from 7.9% in Q4 2012. China’s official manufacturing PMI dropped to 50.6 in April from 50.9 in March, another sign that the Chinese growth is slowing down. This is having an impact of the iron ore price, which has dropped 11% from the peak in February to $137.40 a ton in April. 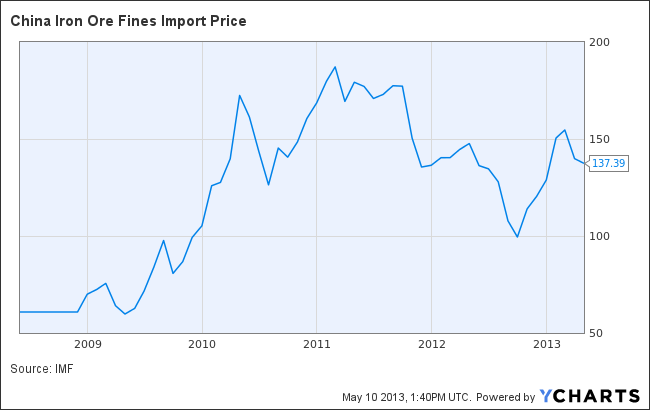 The impact of the slowdown in demand and lower iron ore prices can be seen in the company’s earnings results. In its Q1 results, Cliffs Natural Resources Inc (NYSE:CLF) reported that its revenue declined 6% year-on-year to $1.1 billion, driven by a 10% year-on-year decrease in iron ore sales volume. The company increased its full year guidance for U.S. iron ore sales by 1 million to 21 million tons while maintaining its guidance for other regions. However, sales from Cliffs’ Asia Pacific Iron Ore division are highly sensitive to spot iron ore price, and a further fall in price due to the slowdown in China could have an adverse impact on the company’s outlook. Therefore, I expect the price of its stock to remain under pressure.

Investing in stocks with a high short interest is always risky due to the increased volatility of such stocks. However, if you get your thesis right, there is a lot of return to be made as the short squeeze plays out. I believe that the short squeeze will continue in Tesla Motors and Blackberry, but not in Cliffs Natural Resources Inc (NYSE:CLF).

The article Will The Short Squeeze Continue? originally appeared on Fool.com and is written by Zain Zafar.

Bonus Biotech Stock Pick: You can also find a detailed bonus biotech stock pick that we expect to return more than 50% within 12 months.
We may use your email to send marketing emails about our services. Click here to read our privacy policy.
Related Insider Monkey Articles
Research In Motion Ltd (BBRY): What Does This Good News Mean?Tesla Motors Inc (TSLA), SolarCity Corp (SCTY): What’s Next?