Tesla Motors Inc (TSLA): Here’s Why Earnings Could Be in Trouble

An often overlooked factor that can have a significant impact on a company’s bottom line is the costs or benefits derived from environmental regulations. While Tesla Motors Inc (NASDAQ:TSLA) has been benefiting from its ability to sell “zero-emissions” credit to other automakers, a recent report suggests that the California Air Resources Board is considering changing certain rules that would negatively affect the company’s bottom line.

If this is catching you off guard, it shouldn’t. The practice has been going on since its pre-IPO days in 2009, when Honda Motor Co Ltd (ADR) (NYSE:HMC) and others were purchasing the credits at fairly meaningful levels. Still, with programs such as California’s Zero Emission Vehicle Program, or ZEV, going into effect, the future looks bright for Tesla Motors Inc (NASDAQ:TSLA) and the electric car.

California rule change and Tesla
A significant contributor to Tesla Motors Inc (NASDAQ:TSLA)’s ability to turn a profit in the first quarter came from the $68 million it received from selling zero-emission credits, the end of which CEO Elon Musk acknowledged in the first-quarter earnings call. He explained that the company expected to see this revenue source decline in each successive quarter — likely to be gone by the fourth quarter — but assured investors that he believed the company would be profitable on its own by the end of 2013. Even if the credits persist, Musk said Tesla Motors Inc (NASDAQ:TSLA) isn’t accounting for this income in its projections. Still, many attribute the 300%-plus run in the stock’s price this year to the company’s positive first quarter, prompting the question of what happens if Tesla Motors Inc (NASDAQ:TSLA) puts up a series of quarterly losses from here. 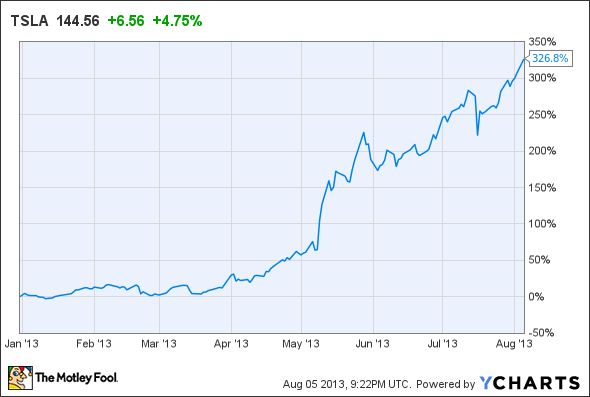 The change that’s expected from the California Air Resources Board is an alteration to the “fast refueling” rule that gave extra zero-emissions credits to vehicles with easily switched batteries. A demonstration with Tesla Motors Inc (NASDAQ:TSLA)’s Model S showed the battery could be switched in less than two minutes. To achieve the top tier of ZEV credit, a vehicle must have a city range of 300 miles and be able to be 95% recharged in 15 minutes. The Tesla S can only get there by virtue of battery switching. In the absence of the rule, the company would still receive credit, but at a significantly reduced rate.

The longer view for Tesla
While the short-term impact of regulation changes at the California Air Resources Board may dampen Tesla’s profits, the long-term view remains very positive. At the end of 2012, the California ZEV program was granted the waiver it needed from the U.S. Environmental Protection Agency to make its mandate on ZEVs law. Under the mandate, beginning in 2018, automakers will be required to sell an increasing percentage of ZEVs. The percentage begins at 4.5% in 2018 and rises to 22% in 2025. Companies will be able to achieve partial credit for hybrids, calculated based on each vehicle’s battery-only range.