In my opinion, this panicked sell-off has created a possible investment opportunity for patient investors. In this article I’ll examine the strengths and weaknesses of Dick’s, which survived the recession and emerged far stronger than many of its industry peers.

Granted, these numbers weren’t great – but were they really bad enough to justify such a slide? Let’s delve into the company’s strengths and weaknesses.

However, those gains were offset by lower sales of fitness products, outerwear and cold weather accessories. The company attributed this decline to an unusually warm December followed by a colder January and February in many parts of the country.

CEO Edward Stack stated that the warm December caused the company to reduce inventory levels of cold weather merchandise in anticipation of a warmer January and February, to “align with lower consumer demand and avoid carrying over excess inventory.”

Although that was a shrewd move to manage inventory and protect margins, it limited the retailer’s ability to capitalize on the unexpected surge in demand for cold weather merchandise in January and February. As a result, inventory per square foot rose 0.7% from the prior year quarter.

The company’s margins have remained relatively stable over the past three years since the recession. 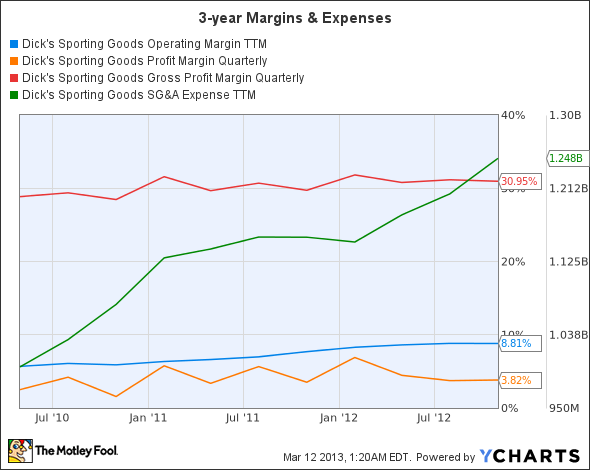 However, a divergence of operating and profit margins in early 2012, coupled with a sudden surge in SG&A (sales, general and administrative) expenses sticks out like a sore thumb – but investors shouldn’t be too concerned, since the company still has $294.49 million in cash and only $22.74 million in outstanding long-term debt.

However, since its e-commerce segment includes online sales from Dick’s and Golf Galaxy, we should also look at same-stores sales by chain, with e-commerce included.

As we can see, Dick’s namesake stores were the primary beneficiary of its e-commerce business. For the full year, same-store sales across all segments rose an average of 4.3%.

The company also plans to spend the remainder of 2013 investing in areas of higher growth. These include:

In addition, the company recently approved a stock repurchase plan of $1 billion to be implemented over the next five years. Although I’m not a big fan of stock repurchases – since that money could be better spent elsewhere on new innovations and store expansions – buying back stock after its recent plunge should be beneficial to existing shareholders.

Dick’s directly competes against Cabelas Inc (NYSE:CAB) and Hibbett Sports, Inc. (NASDAQ:HIBB), and is an indirect competitor to superstore Wal-Mart Stores, Inc. (NYSE:WMT), which also offers a wide selection of sporting goods. How does Dick’s fare against these companies on a fundamental basis?

Hibbett, which is the smallest of Dick’s rivals, has the advantage of growth, enhanced by stronger margins, lower debt and better past performance. Meanwhile, based on 5-year PEG ratios – which can be inaccurate due to unforeseen macro factors – Cabelas Inc (NYSE:CAB) has a slight edge in growth. Yet Dicks Sporting Goods Inc (NYSE:DKS) is still a healthy company, with very low debt levels and cheap forward valuations.

A look at top and bottom line growth over the past three years also confirms this view. 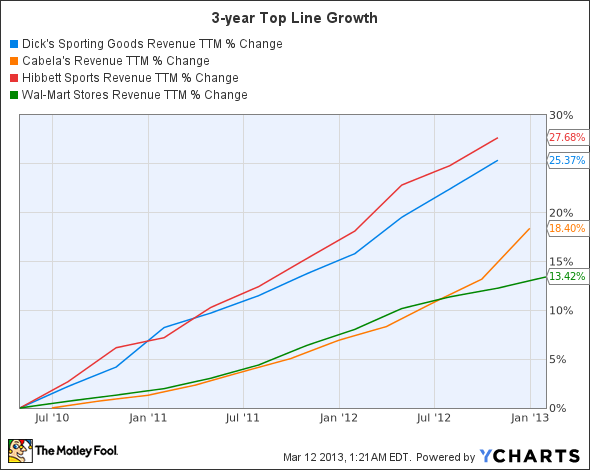 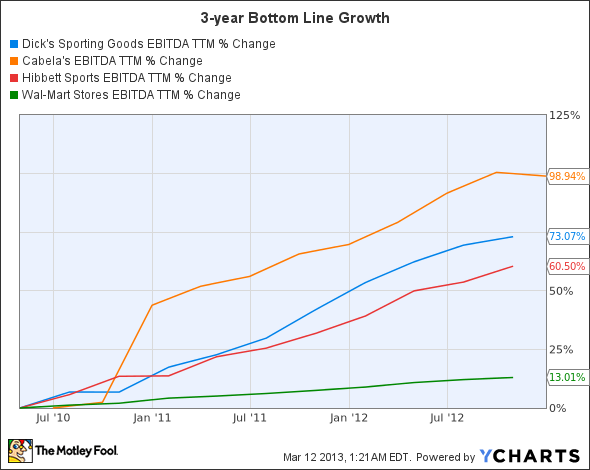 Although it appears that Dicks Sporting Goods Inc (NYSE:DKS) will have a rough year ahead, its fundamentals indicate that its long-term growth is still intact. Investors in Dick’s and its industry peers should remember that its industry is cyclical and can be swayed by weather conditions and macroeconomic problems. While the stock is down roughly 5% over the past 12 months, it has actually risen 70% over the past five years, and 700% over the past decade – which makes it a viable stock to buy and hold for the long run.

The article Should You Buy the Dip at Dick’s? originally appeared on Fool.com and is written by Leo Sun.