Should You Buy The Blackstone Group L.P. (NYSE:BX)?

While more difficult to quantify, we believe the firm also is amongst the leaders in the public markets in the additional characteristics of loyal customers, the strength of its global franchise, the depth of its competitive moat and its brand equity.

Despite this record of success and its strong future prospects, BX’s stock has been, at best, an average performer since its 2007 IPO.7 BX shares have also materially underperformed its business fundamentals. This mediocre stock performance is, we believe, among other things, a function of (1) the timing of the company’s IPO (at the beginning of the financial crisis), (2) the fact that the accounting for unearned performance fees gives the appearance of earnings volatility (despite what we view as one of the more predictable cash flow generating companies in the market), and (3) its structure as a limited partnership (which results in complex accounting as well as shareholders having to deal with K-1 reports when filing their tax returns). Although we are not banking on multiple expansion in our investment thesis for BX, we do believe that the company is entering a period in which its earnings growth and dividend payouts will increase more steadily given the size of its asset base and the expected realization stream from assets the firm raised post-financial crisis. In fact, at its analyst day, BX management guided to a 50% increase in fee related earnings over the next two years as its larger mandates come on line. We also believe that the company is entering a period of more robust incentive fee earnings as some of its more successful funds enter their more mature harvesting phases. More robust incentive fees plus significant growth in fee-related earnings should result in an acceleration and a more predictable trend of distributable earnings growth. In addition, the management team is actively considering a potential change in corporate structure to a traditional C corporation, which has the potential to expand the firm’s shareholder base (broad market indices, for example, do not include BX as a result of its structure) as well as to reduce the complexity of its reporting.

Although this would come with a higher tax bill, it is possible that the market would afford a much higher multiple to the company as a traditional C Corp (as has been the case for BX competitor KKR, which converted earlier this year).

Given its current low valuation, we anticipate that the company’s stock will at least keep pace with what we believe will be its well above average earnings growth of 15%+ per year for the foreseeable future. However, as with all of our holdings, we would welcome the challenge ofmanaging down our position size over time should the company’s shares materially outperform its earnings growth over the next few years and be afforded a valuation more in-line with, or at what we believe would be a well-deserved premium to, that of the average company in the S&P 500.

While we remain extremely positive about our BX position, we also believe that the

characteristics in its “truly great business” slide above presents a list of attributes that each of the other companies in our portfolio could also use to describe their businesses at any of their future analyst days.

Similar to Blackstone, many of our holdings have a limited need for capital (43% of our portfolio is represented by companies with no net debt) and generate significant free cash flow (e.g. CME generated $1.8 billion of operating cash flow and spent less than $100 million on capital expenditures, Mastercard generated $5.6 billion and needed only $300 million for capital expenditures, and Adobe generated $2.9 billion while spending only $175 million on capital expenditures).10 Most are also impressive global franchises with loyal customers and significant brand equity, such as Apple, Google, Amazon, Facebook, Visa, Mastercard, Nike, Adidas, and Schlumberger, which also have substantial moats. For example, Visa and Mastercard have a global oligopoly in payments, Adobe enjoys a virtual monopoly in the multimedia software industry, patents protect the core innovations underlying the products for Align Technology, Intuitive Surgical, Exact Sciences and Illumina, Equinix’s global footprint far exceeds that of any of its competitors (75% larger than the second largest player in the industry), and Alphabet and Facebook utterly dominate in eyeballs and ad dollars in search and social media.

It has always been our belief that owning truly great businesses–as long as they trade at attractive valuations–is the best way to compound one’s money in the equity markets. Such companies generally thrive regardless of the current political, economic or market landscape and tend to perform well in both rising and falling markets. If purchased at attractive valuations, we believe it is more than reasonable to earn equity returns that are at least commensurate with these companies’ long-term earnings growth rates, which are often at a 2-3x multiple to the long term average returns in the equity markets.

As with Blackstone, we believe that the companies we own in the RiverPark Large Growth Fund are truly great businesses. And, because, on average as with Blackstone, the growth of earnings throughout our portfolio has been greater than the total return for the stocks, we continue to believe that the valuations for these companies are attractive and give us great confidence in the overall prospects for our performance in the years to come.”

How have hedgies been trading The Blackstone Group L.P. (NYSE:BX)?

At Q3’s end, a total of 35 of the hedge funds tracked by Insider Monkey were long this stock, a change of 3% from one quarter earlier. By comparison, 37 hedge funds held shares or bullish call options in BX heading into this year. With the smart money’s positions undergoing their usual ebb and flow, there exists an “upper tier” of notable hedge fund managers who were increasing their holdings substantially (or already accumulated large positions). 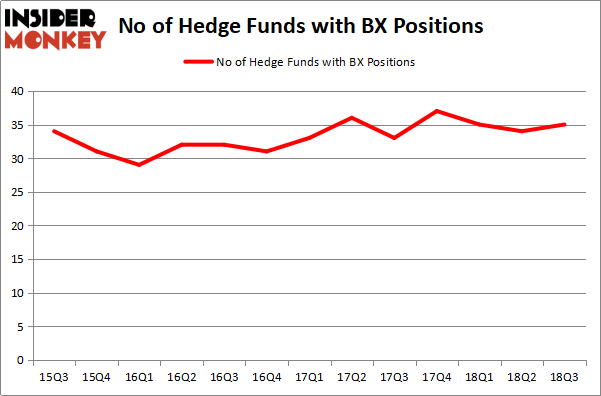 As you can see these stocks had an average of 29 hedge funds with bullish positions and the average amount invested in these stocks was $1.94 billion. That figure was $615 million in BX’s case. Capital One Financial Corporation (NYSE:COF) is the most popular stock in this table. On the other hand Infosys Limited (NYSE:INFY) is the least popular one with only 18 bullish hedge fund positions. The Blackstone Group L.P. (NYSE:BX) is not the most popular stock in this group but hedge fund interest is still above average. This is a slightly positive signal but we’d rather spend our time researching stocks that hedge funds are piling on. In this regard COF might be a better candidate to consider a long position.