We have been waiting for this for a year and finally the third quarter ended up showing a nice bump in the performance of small-cap stocks. Both the S&P 500 and Russell 2000 were up since the end of the second quarter, but small-cap stocks outperformed the large-cap stocks by double digits. This is important for hedge funds, which are big supporters of small-cap stocks, because their investors started pulling some of their capital out due to poor recent performance. It is very likely that equity hedge funds will deliver better risk adjusted returns in the second half of this year. In this article we are going to look at how this recent market trend affected the sentiment of hedge funds towards Orthofix International NV (NASDAQ:OFIX), and what that likely means for the prospects of the company and its stock.

Is Orthofix International NV (NASDAQ:OFIX) a buy right now? Money managers are becoming hopeful. The number of bullish hedge fund positions inched up by 3 recently. OFIX was in 23 hedge funds’ portfolios at the end of the third quarter of 2016. There were 20 hedge funds in our database with OFIX positions at the end of the previous quarter. The level and the change in hedge fund popularity aren’t the only variables you need to analyze to decipher hedge funds’ perspectives. A stock may witness a boost in popularity but it may still be less popular than similarly priced stocks. That’s why at the end of this article we will examine companies such as American Railcar Industries, Inc. (NASDAQ:ARII), Encore Wire Corporation (NASDAQ:WIRE), and Brooks Automation, Inc. (USA) (NASDAQ:BRKS) to gather more data points. 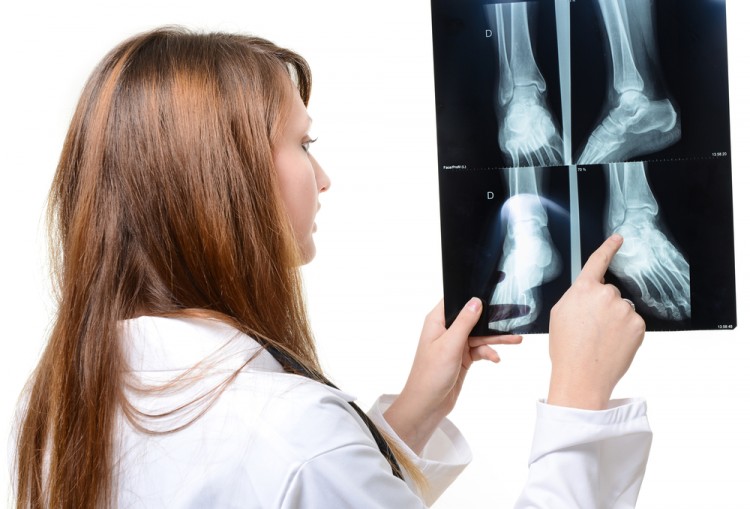 With all of this in mind, we’re going to go over the latest action regarding Orthofix International NV (NASDAQ:OFIX).

What does the smart money think about Orthofix International NV (NASDAQ:OFIX)?

At Q3’s end, a total of 23 of the hedge funds tracked by Insider Monkey held long positions in this stock, 15% up from the second quarter of 2016. With hedgies’ capital changing hands, there exists an “upper tier” of notable hedge fund managers who were boosting their holdings considerably (or already accumulated large positions). 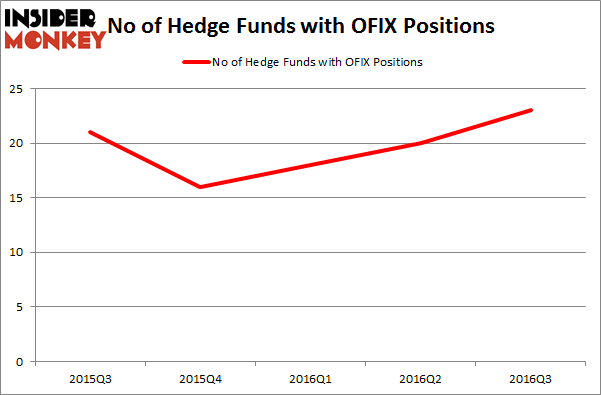 According to publicly available hedge fund and institutional investor holdings data compiled by Insider Monkey, Camber Capital Management, managed by Stephen DuBois, holds the biggest position in Orthofix International NV (NASDAQ:OFIX). According to regulatory filings, the fund has a $64.2 million position in the stock, comprising 2.8% of its 13F portfolio. Coming in second is Ric Dillon of Diamond Hill Capital, with a $50.3 million position; the fund has 0.3% of its 13F portfolio invested in the stock. Other members of the smart money that are bullish include Mitchell Blutt’s Consonance Capital Management, Jim Simons’s Renaissance Technologies and Israel Englander’s Millennium Management.

Now, specific money managers were breaking ground themselves. Pura Vida Investments, managed by Efrem Kamen, initiated the most valuable position in Orthofix International NV (NASDAQ:OFIX). According to its latest 13F filing, the fund had $3 million invested in the company at the end of the quarter. Neil Chriss’s Hutchin Hill Capital also initiated a $0.7 million position during the quarter. The following funds were also among the new OFIX investors: Joshua Packwood and Schuster Tanger’s Radix Partners and George Hall’s Clinton Group.

As you can see these stocks had an average of 14 hedge funds with bullish positions and the average amount invested in these stocks was $170 million. That figure was $231 million in OFIX’s case. Anika Therapeutics, Inc. (NASDAQ:ANIK) is the most popular stock in this table. On the other hand Brooks Automation, Inc. (USA) (NASDAQ:BRKS) is the least popular one with only 11 bullish hedge fund positions. Compared to these stocks Orthofix International NV (NASDAQ:OFIX) is more popular among hedge funds. Considering that hedge funds are fond of this stock in relation to its market cap peers, it may be a good idea to analyze it in detail and potentially include it in your portfolio.