Storage makers hit a wall of worry in the last few days, driven by weak quarterly results, a tepid outlook, and weaker profits. It is no secret that hard drive manufacturing is a mature market, but investors need to ask just one question: are storage devices just commodities set on a path of a permanent decline?

Seagate Technology PLC (NASDAQ:STX) reported a 5.6% decline in gross margin, at a 28% level, from a year-ago period. In its supplemental financial information presentation, Seagate reported most of its shipment growth came from enterprise storage. Client Computer shipments declined substantially from last year: Seagate shipped 34.7 million units in the fourth quarter (fiscal 2013), compared to a peak of 46.3 million in fiscal 2012. Conversely, Enterprise Storage dropped by just 0.3 million units in the same period. Shipments actually grew from 6.9 million units in the first quarter of 2012 to 8.2 million in the fourth quarter of 2013.

On the bright side, the average gigabyte per drive increased steadily over the last eight quarters, while inventory turns were also steady. This suggests that Seagate Technology PLC (NASDAQ:STX)will need to ship more storage capacity per unit to at least sustain sales.

The drop in Seagate Technology PLC (NASDAQ:STX) also hurt Western Digital Corp. (NASDAQ:WDC). Even though the magnitude of the decline was similar for both companies, Seagate is down 10% on the month, while investors in Western Digital are breakeven: 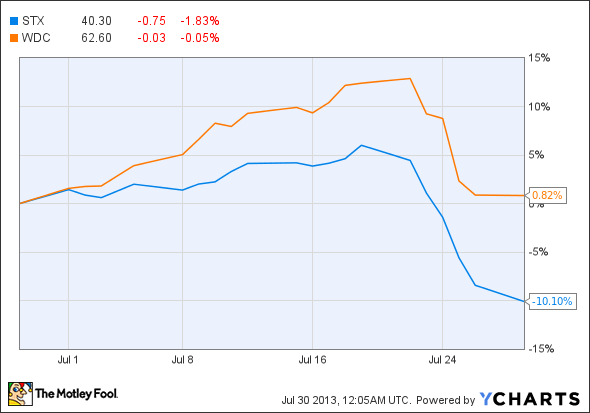 Both hard drive makers have similar characteristics. The P/E, price to sales, and EBITDA are roughly the same. Seagate Technology PLC (NASDAQ:STX) offers a higher yield, but this was not sufficient to prevent the stock sell-off.

Investors were disappointed when Western Digital Corp. (NASDAQ:WDC) issued a weak guidance for the current quarter. The disk makers expect revenue to meet analyst consensus at best. The company could earn between $1.95 and $2.05 per share. This compares unfavorably to a consensus of $2.05 per share, because Western Digital could come in with results below this figure. In the last quarter, shipments dropped to 59.9 million units, a 16% decline from last year. Sales were hurt by weak notebook (negative 27%) and desktop (negative 24%) shipments. Enterprise shipments did not grow, while shipments for consumer electronics offset the decline.