Due to Iran’s decision to go forth with its nuclear program, many countries have decided to boycott it crude. But most Asian nations still went ahead to import Iranian crude, which had stabilized crude prices. However, according to recent headlines, China’s crude imports from Iran have declined by nearly 20% this year. Moreover, Indian government officials have announced that India would be cutting down its Iranian crude imports by 10%-15% in 2014.

Earlier this year Saudi Arabia had promised that it would be ramping up its crude production to meet up with the shortfall in supply, but according to recent reports it has actually cut its production by around 7,00,000 bpd. This shortfall in supply would further drive up the prices of the commodity, which makes oil exploration and development a profitable affair.

Volatility is Not Your Friend

But the share prices of oil E&P companies becomes volatile at times due to international bureaucratic loops and complex procedures. Exxon’s exit from Iraq has been a huge blow for the company, as it won’t be able to explore in Iraq’s hydrocarbon-rich areas. Shares of Chevron are also under pressure due to its ongoing $19 billion lawsuit due to its Brazilian oil spill.

Both Chevron and ExxonMobil are trading at ridiculously high PEG values, and analysts estimate flat EPS growth over the next 5 years. The modest dividend payout offered by these companies is definitely not worth the risks posed by market volatility.

So Where To Invest?

Investors looking to avoid these risks should consider investing in global E&P equipment and service providers like Schlumberger Limited. (NYSE:SLB) and Baker Hughes Incorporated (NYSE:BHI). But then again, not all companies in a good industry can offer significant upside.

Due to the shale gas boom in North America, prices of natural gas in the region have plunged by nearly 50% over the last 3 years. Due to this price crash, natural gas E&P in the North American region isn’t a profitable venture anymore, which is why gas exploration activities have reduced significantly. Moreover, the operating rig count in the region recently touched its 13 year lows, which altogether is negatively impacting the profitability of Baker Hughes. Baker Hughes has a net profit margin of only 6.15%, whereas Schlumberger sports a net margin of 12.92%.

Schlumberger seems to be doing it right. The company is the largest oil-field service provider in the world, and its geographically diversified operations ensure that its growth is not dependent on a particular region. North America accounts to only 1/3 of its revenues.

Shares of Schlumberger appear to be fairly valued, but that doesn’t mean that its shares can’t head north. Analysts expect its annual EPS growth to average around 17% for the next 5 years, and going by the rule of 72, your money could double in a little more than 4 years. 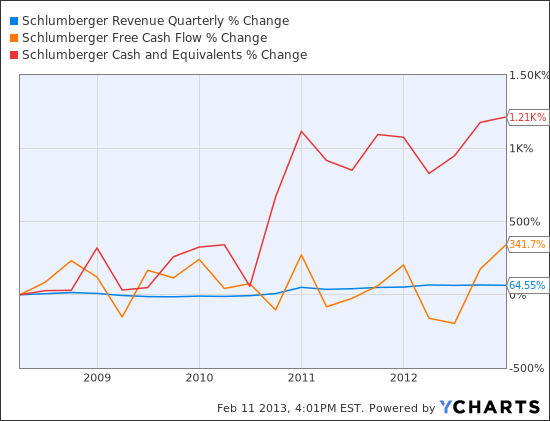 The chart above displays some key financial metrics of Schlumberger and their solid growth trend over the last 5 years.

Chevron and ExxonMobil may be solid bluechips, but I believe that Schlumberger can deliver more returns. It’s international presence and a small peer group allows it to equally take advantage of high growth areas like the Norwegian Sea, the Barents Sea, and even the South China Sea. In short, Schlumberger gets a Foolish Buy Rating, while the other mentioned companies do not.

The article This Company Could Make You Rich! originally appeared on Fool.com and is written by Piyush Arora.

Two of the Worst Losses in Business History: Texaco and FedEx Corporation (...

Is Management Bullish on The Future of ConocoPhillips (COP) and HollyFrontier...

Will Powerful EOG Resources, Inc. (EOG) Blow Us Away Again?